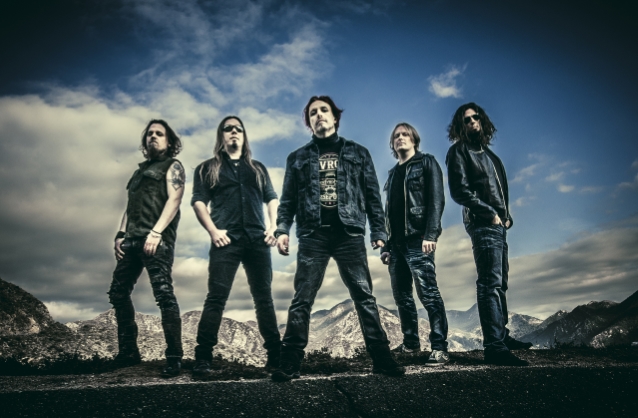 Prior to Finnish progressive power metal band SONATA ARCTICA's acoustic performance in London on March 19, keyboardist Henkka Klingenberg and bass player Pasi Kauppinen spoke with Metal Underground. The full conversation can be viewed below. A few excerpts follow (as transcribed by BLABBERMOUTH.NET).

On why the band decided to embark on an acoustic tour:

Henkka: "We're in the middle of recording our next album. We kind of ended the tour cycle already with the previous one, and we don't want to stay [stale], so we wanted to come up with something. About three years ago, we did a lot of acoustic shows, which worked really well, so we wanted to get back to that and give it another shot."

On how their acoustic shows differ from their electric ones:

Pasi: "Everything changes. It's funny, because all the mellow songs, they are almost the same as they are in our normal sets, but the faster songs are of course a little bit stripped down."

Henkka: "We all use pretty much different instruments, and the soundscape, everything is more organic, maybe, and maybe not so well thought-out. [Laughs] Basically, anything can happen. It's more free... Like Pasi said, the ballads are closer to the originals, but then everything else, the uptempo songs, the fast songs are totally different."

Henkka: "We've been working with the same guy — his nickname is ToxicAngel. He's a bit crazy, but he does a really great job. We've been working with him now for I don't know how many albums... Some of the songs on 'The Ninth Hour' were dealing with the topics of nature and us destroying our planet and the survival of mankind, stuff like that, so that is something that was brought into the artwork, in that you have this kind of hourglass, time machine, capsule, whatever you'd call it on the cover, and on one side, you have this futuristic [scene] with technical stuff and not so much nature, and on the other side, you have a picture of a wolf and the nature where there's no people destroying the earth. Right now, we're kind of leveled, and then we'll see which way it's going to [tilt] in the future."

On "The Ninth Hour" song "Fairytale", which satirized American politics:

Henkka: "That was the first, and hopefully the last, time Tony [Kakko, vocals] writes anything about politics."

On the status of the group's new album:

Henkka: "I have no idea what [Tony has] been writing so far. We have recorded most of the music, if not all of it, so we're waiting for Tony to lay down his vocals. The rest, we started already before we went out [on tour]. I have no idea about his lyrics — I don't think anybody does. Hopefully no politics."

On the band's continued usage of wolves in their artwork:

Henkka: "It's a mystical creature, and fascinating... Somehow, Tony started writing some songs about wolves — we put one here and one there — and all of a sudden, it became this thing, and then it became sort of like a [symbol] for the band. Always, the shirts with the wolves on them sell very well, so it's part of the images that you connect with the band."

On whether the band — who has covered artists from IRON MAIDEN and SCORPIONS to Bette Midler and Bryan Adams over the years — has any plans to record a full covers album:

Henkka: "No. I think bands seem to do that when they run of out ideas or want to take a break. That might happen [to us], but we haven't talked about that — at least not seriously. I think it came up some years ago briefly, but [not] at the moment... I don't think they are really important for us as a band anymore, but whenever there's a good song that makes sense for us and we feel, 'Hey, we should do this,' then we're going to do it."

On whether the band plans to commemorate the 20th anniversary of its debut, "Ecliptica":

Henkka: "We played the album front to back for some shows [in 2014] in Finland, Europe and Japan as well, so I don't think we can do it again five years later. Also, it doesn't fit with the schedule — we're doing the acoustic stuff now, then festival season starts, and then the [new] album will be out in the fall, so we have to skip the 20th [anniversary]. We'll see [about] the 25th. Also, I think that once you've done it — when you've played the whole album once — then it makes no sense to do it again."

SONATA ARCTICA's latest album, "The Ninth Hour", was released in October 2016 through Nuclear Blast. The disc was produced by the SONATA ARCTICA members themselves and mixed by Kauppinen.

SONATA ARCTICA will support KAMELOT on the second North American leg of its "The Shadow Tour" in September and October.