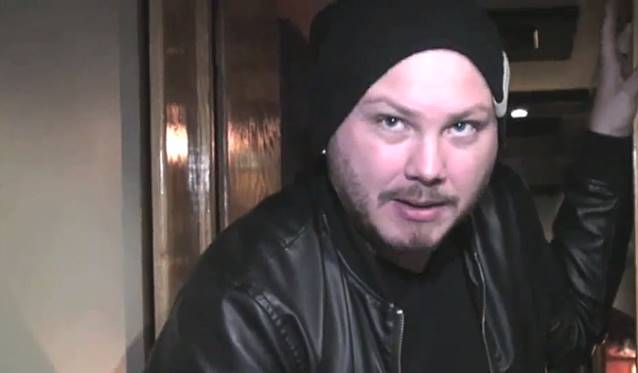 On March 15, Mark Holmes of Metal Discovery conducted an interview with vocalist Björn "Speed" Strid of Swedish metallers SOILWORK. A couple of excerpts from the chat follow below.

Metal Discovery: You released the double album last year, "The Living Infinite", which must've been a mammoth task anyway, but with Peter [Wichers] leaving again in 2012, and David [Andersson] coming in permanently on guitar, did that make the task of writing and recording a double album even more of a mammoth task, or did fresh blood actually make the whole process more exciting and less daunting?

Björn: I expected it to be way harder to record a double album, but it was pretty smooth for some reason; I don't know what it was. For me, personally, I actually started to sing pretty early in the recording process, so I could actually record one song a day instead of just waiting until the end and, "Okay, mister singer, you've got two weeks and that's it." That puts a lot of pressure on you and it's a good thing to focus on one instead of having it at the back of your head that, "Oh, I need to record two more today to be able to pull this off." There was a song of the day, and then you kind of focus on that and give it all you've got. And, as far as the songwriting, it's been a pleasure working with David. We've known him for quite some time and he's filled in before — I think he's done two North American tours before joining the band. He's a great human being, a great guitar player, a great songwriter… he inspired us to bring back some of the more Scandinavian elements that we had more of in the beginning of our career. So his writing is slightly different from Peter. Peter, I feel, has more of a kind of American approach to the riffing, and there's nothing wrong with that, but I felt that I missed some of those more Scandinavian melancholic melodies in there.

Metal Discovery: Looking back at the whole process now, did you learn anything about yourselves as songwriters in having to come up with an abundance of material?

Björn: Well, I think we learned that we can still be really inspired. We've been around for a very long time and I feel… there's a lot of bands out there that have been around just as long as us, or even longer, that you almost feel like it's corporate metal; it's just the same album. We still develop our music and develop as musicians, and I think that's a really great thing. I'm really proud of the band being able to stick it through with everything that happened, and be able to be that inspired and come up with something that majestic, and that holds a lot of presence as well.

Metal Discovery: You've managed to progress and diversify your sound again, but were you conscious to hold back a bit and not diversify too radically, so that you could keep the essence of what fans already love about your music?

Björn: Not really, because we didn't really discuss it. Each and every member stepped forward and contributed with songs, and I think people really got high on the fact that they could actually break the moulds a little bit and go a little bit bananas, because that's exactly what we wanted. We wanted it to be a band effort; we needed it to be diverse and, if it's gonna be progressive, that's fine, you know. It was really a big challenge for me as well, especially with Sven and Sylvain's songs; they were a little bit more complex, in a sense. David's are a little bit more straightforward. So I've developed a lot as a singer with that… you know, I'm kind of a sucker for the old, classic melodies and stuff like that. I like things to be catchy but, at the same time, I don't mind progressive elements at all. If it feels right, it's awesome.

Metal Discovery: Would you ever want to tackle a double album again, having been through it once?

Björn: Yeah! It's just it almost feels like it's kind of boring going back to a single album! [Laughs]

Metal Discovery: How do Nuclear Blast feel about that? Was it hard to get their approval to do a double album in the first place?

Björn: Well, I guess we were a little nervous at first because, "They must be crazy." That's the kind of reaction we expected, but it was, "Oh, that's brilliant, that's brilliant." And we didn't know when we decided, but it turned out to be the first double album in death metal history.

Metal Discovery: Would you ever want to do a live show where you perform "The Living Infinite" in its entirety?

Björn: I would like to, but it's kind of hard, because we live spread out all over the world so we can't really do any spontaneous jam sessions. I would like to, but we're used to working this way now, and sending files back and forth, and it's been working for us still. But who knows?! Maybe in the future, it could be time to perform the whole double album.