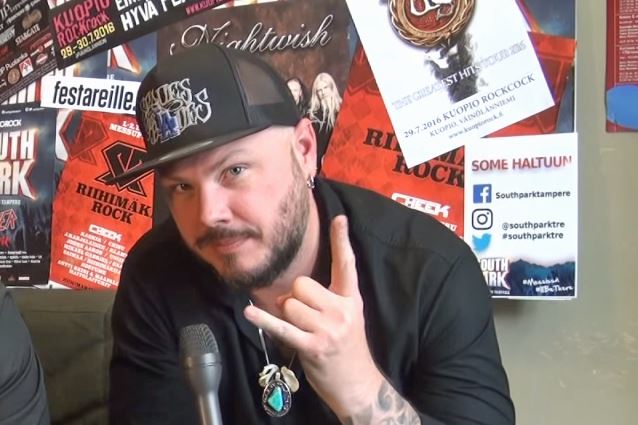 On June 11, Kaaos TV conducted an interview with vocalist Björn "Speed" Strid and guitarist David Andersson of Swedish metallers SOILWORK at the South Park festival in Tampere, Finland. You can now watch the chat below. A couple of excerpts follow (transcribed by BLABBERMOUTH.NET).

On how SOILWORK drummer, Dirk Verbeuren, came to be touring with MEGADETH while Chris Adler is busy on the road with LAMB OF GOD:

Björn: "I believe that Dave [Mustaine, MEGADETH mainman] called Dirk at the end of the U.S. tour that we were doing together with FEAR FACTORY, so that's kind of how it came together. Then we obviously needed to find a session drummer, and Dirk recommended one of his drum students, Bastian [Thusgaard of THE ARCANE ORDER], who's playing with us tonight."

On whether it was an easy transition having Bastian stepping in for Dirk:

Björn: "Well, it's never really easy, especially when you need to go through the set, and it's hard for somebody to come in and play seventeen songs and it needs to lock in. Obviously, it's gonna be hard, but I think he has done a terrific job — really good."

On his personal opinion of Dirk playing with MEGADETH:

Björn: "I mean, obviously, it's a great opportunity, and it was a little bit surreal, obviously, when Dave Mustaine is calling Dirk on the phone. But Dirk is a fantastic drummer, so I'm not shocked by any means."