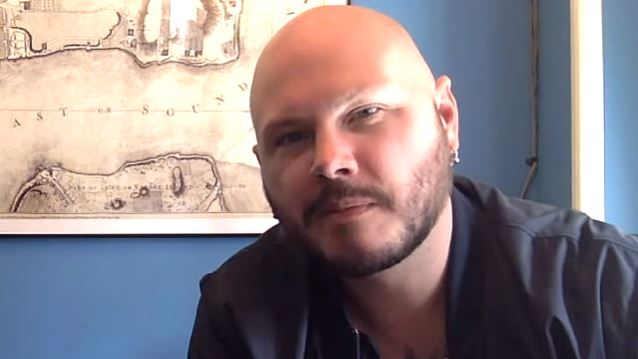 Sticks For Stones recently conducted an interview with vocalist Björn "Speed" Strid of Swedish metallers SOILWORK. You can now listen to the chat below. A couple of excerpts follow (transcribed by BLABBERMOUTH.NET).

On the departure of longtime SOILWORK drummer Dirk Verbeuren:

"Well, I mean, he was supposed to only fill in for Chris Adler in June for MEGADETH. And after I saw MEGADETH with Dirk on the drums at the Sweden Rock Festival, I knew that Dave Mustaine was gonna pop the big question, because it sounded so damn good. So I wasn't that surprised after all, and I understand Dirk as well. He has my full support. And it's definitely a great opportunity for him. And, of course, it put us in a little bit of a sticky situation; we've been doing this together for twelve years. But, luckily, Dirk recommended Bastian Thusgaard [of THE ARCANE ORDER], a fantastic Danish drummer; he's 24 years old. And [he's] Dirk's drum student and also sort of like a protégé. So he recommended him to do the festivals that he couldn't do in the summer, and Bastian has been doing really, really well; he's nailing the songs and he's [got a] great personality, and we get along very well. So it's been sort of like a smooth transition as well. I mean, we haven't announced him as the permanent drummer, but, quite frankly, I don't really see any reason of trying out anybody else, 'cause I think we really work well together and I would look forward to write some new stuff with him, for sure."

On how long SOILWORK has to rehearse with a new drummer before the songs are "up to scratch" again:

"Yeah, I would say so. It's gonna take a lot of shows. It doesn't matter what drummer comes in, it's gonna take time before it locks in, if you know what I mean. It's just one of those things. And it was the same when Dirk came into the band after Henry Ranta left. It will take some time. But I think considering… I mean, Bastian has been doing really well. Being 24 years old, and coming in and nailing the songs the way he has, it's really impressive."

On SOILWORK's plans for the coming months:

"Well, we still have some festivals left to do in Europe, and we're gonna do U.K. together with ARCH ENEMY as well in August. Then we're gonna hit South America for the first time. And then we're gonna do North America, a headline run, in October, and then we're gonna have a little bit of a break, and I'm gonna focus on recording THE NIGHT FLIGHT ORCHESTRA, my other band that I have together with David [Andersson] from SOILWORK, the guitarist, and also Sharlee D' Angelo from ARCH ENEMY. So that's gonna be the main focus after that. We just recently signed with Nuclear Blast, so that's gonna come out sometime in the spring. We'll have a little bit of a break there, and then we'll do KREATOR/SEPULTURA tour through Europe, with SOILWORK, in February. And then after that… I don't know… We might slowly get into writing mode and maybe we'll have an album out before 2017 is over. I'm not sure. We'll see."

SOILWORK will embark on the second North American "Fury Tour" in October. Support on the 26-date trek, which launches October 14 in Providence, Rhode Island, will come from UNEARTH, WOVENWAR, BATTLECROSS and DARKNESS DIVIDED.