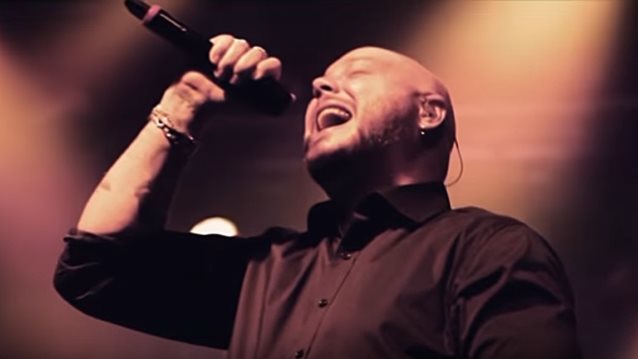 Matt Mills of Far Beyond Written conducted an interview with vocalist Björn "Speed" Strid of Swedish metallers SOILWORK prior to the band's March 16 date at the O2 Forum in London, England as the support act for KREATOR and SEPULTURA. You can listen to the full chat below. A few excerpts follow (transcribed by BLABBERMOUTH.NET)

On the band's 2016 B-sides and rarities album "Death Resonance":

Björn: "Basically, we had some leftovers from 'The Ride Majestic' that didn't really fit the flow [of the album], but they were really cool songs. At the time, we were also going through the vaults and found a lot of tracks that have only been released in Japan before and some had not been released at all. Some had been on video games and stuff like that. There was also the EP, 'Beyond The Infinite', that was only released Japan. We kinda pissed off the rest of the world. We didn't really expect that; it was leftovers from 'The Living Infinite', but people really seemed to like those songs. Some of the songs on the compilation are slightly more progressive. Now it makes sense why they didn't fit back then, but I think we are slightly more progressive again, so it makes sense timing-wise as well, I guess. There's some cool tracks on there."

On whether SOILWORK would attempt something like their 2013 double album "The Living Infinite" again:

Björn: "I doubt it, but it was fun. It was definitely the most fun recording we experienced. There was such a nice flow and nice vibe in the studio. We really loved recording it at Fascination Street [Studios] with [producer] Jens [Bogren]. It was in the countryside and at the end of the summer. I don't know… there was a certain vibe to it that was very inspiring."

On how the band approaches their live setlist:

Björn: "We try to not become too nostalgic. We're still out there promoting our latest album, 'The Ride Majestic'. We always try to make it a nice mix, but also sort of focus on our latest effort."

On whether the band has started writing new songs:

Björn: "Yeah, we have been discussing. We might have the title, but we don't have any music at all, which is interesting. It's usually the other way around. I think we'll slowly get into writing-mode maybe sometime in the summer and then maybe record at the beginning of next year. We're going to take our time, I think. We did so much touring for this album. Last year was absolutely insane."

On whether revisiting their old material and B-sides has given SOILWORK inspiration for their new album:

Björn: "I think so. It was also a matter of grasping how you evolved musically and going back and listening to some of those tracks, or at least some of the memories. I remember for example, 'Martyr', the song, I was so mad that it didn't end up on the album at the time. [Laughs] I let it go, but it also brought it back, like, 'That's a cool song! Why wasn't that on the album?' But at the same time, it also makes sense, looking back. There are a lot of songs that had a playful approach to them. I think that's where we were at, but yes, absolutely I do get inspired by the past."

On whether he would get tired of playing melodic death metal in SOILWORK if he didn't have his classic rock-oriented THE NIGHT FLIGHT ORCHESTRA side project:

Björn: "If it wouldn't be that, it would be something else. I'm a metalhead, but I'm also a rocker, so I'm 50/50. I think it's really good for me. Plus, I think I've developed a lot as a singer through that band and I've brought it with me to SOILWORK as well. But no, I can get sick of the metal scene sometimes because I don't really find that many new bands that have something unique to say, but then again, sometimes you run across some bands and you're like, 'Wow, this is amazing!' I don't want to be cynical about it at all. I'm just having a hard time finding interesting stuff, but when I do, I promote the hell out of it for sure. I still really enjoy performing and writing melodic death metal. It's fun because…we can still evolve as a band. We keep doing that and I think we still have so much to say."

On the newer metal bands he finds interesting:

Björn: "I can mention TRIBULATION. They're one of my absolute favorites. That was like, 'Wow.' It's not something completely unique, but I think it was a unique expression somehow. I really like the vibe of it and the melodies. I really enjoy seeing them live as well. I don't go that much to live shows, at least not metal shows, but I went to see them live and I was blown away."

On his memories of the famed Gothenburg, Sweden melodic death metal scene:

Björn: "We started in Helsingborg, which is three hours south of Gothenburg. We were not there, like in Gothenburg while all those bands were hanging out, but we also went up to Gothenburg to record our albums. That's how we got to know everyone. It was a very creative time. People also tend to romanticize the thing a little bit too much as well, but there was so many good albums coming out, obviously, and then again, I think most bands were sounding the same. I think today, most of those bands from that time have developed their own sound, so it's more diverse today. It is more interesting in a way today because back then, you could barely tell the bands apart, including ourselves, maybe."

SOILWORK recently announced the addition of 25-year-old drummer Bastian Thusgaard to the group's ranks. Thusgaard has been blazing the kit for the band for the past ten months, but will make his official debut as a permanent member of the band at their upcoming summer festival performances.

SOILWORK's most recent studio album, "The Ride Majestic", was released in 2015 via Nuclear Blast.