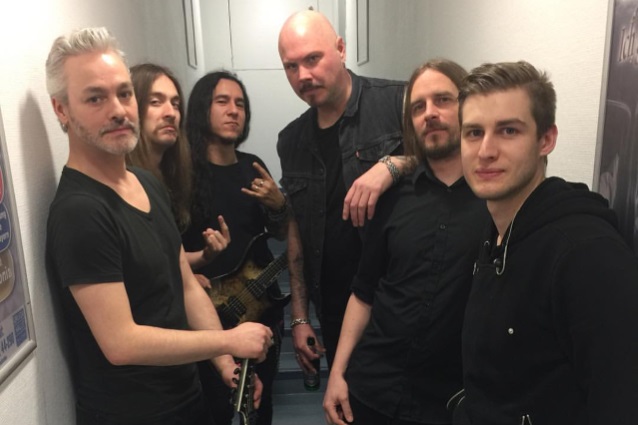 Swedish metallers SOILWORK recently entered Nordic Sound Lab studios in Skara, Sweden with producer Thomas "Plec" Johansson to begin recording their eleventh album. The follow-up to 2015's "The Ride Majestic" is tentatively due in the fall via Nuclear Blast Records.

"The Ride Majestic" was SOILWORK's last album to feature longtime drummer Dirk Verbeuren, who left the band in July 2016 to join MEGADETH. He was replaced in SOILWORK by Bastian Thusgaard of THE ARCANE ORDER.

A short video of Thusgaard laying down tracks for the new SOILWORK album can be seen below.

Thusgaard comments: "I'm so proud of my achievements on this album. I was given a great amount of freedom both in writing and recording. Obviously, I wanted to honor the 'drum vibe' that has developed in the band through time. At the same time, I'm very aware of the fact that I'm a different drummer to my predecessors. This is something I really wanted to showcase by adding my own vibe to the band's sound."

Singer Björn "Speed" Strid adds: "On this new album we have gone back to classic heavy metal basics but with a twist of our own legacy of sound, with soaring melancholic melodies at a sometimes-furious tempo and great diversity. People will recognize the vibe that we've had on the latest two albums, but we feel that we've taken our sound even further, with more energy, darker elements but uplifting structure."

Verbeuren joined MEGADETH at the recommendation of LAMB OF GOD's Chris Adler who played on MEGADETH's "Dystopia" album.