Bassist/vocalist Thomas "Angelripper" Such of veteran German thrashers SODOM has responded to criticism over the band selection for the upcoming "Chris Witchhunter Tribute Concert", which is scheduled to take place on Saturday, April 11, 2009 at Turbinenhalle in Oberhausen, Germany. The event, which will honor late SODOM drummer Chris Dudek (a.k.a. Witchhunter), will feature performances from the following artists:

Thomas "Angelripper" Such wrote in a statement: "During the last weeks I received numerous e-mails concerning the Chris Witchhunter memorial concert, therefore I decided to comment on some of the criticisms.

"There were two main criteria concerning the choice of the bands:

"First it was important to invite bands and musical companions, who had a personal relation with Chris.

"Secondly we booked bands that have their roots in the '80s.

"Actually, both facts apply to DESTRUCTION [who were originally scheduled to take part in the concert], which was our reason to contact them immediately. We were agreed at once and DESTRUCTION confirmed their appearance promptly. Furthermore, Chris had helped them on tour in 1986. After the poster had been finished and printed, Schmier [DESTRUCTION bassist/vocalist] complained about the size of the band logo and asked us to change the layout according to his wishes. We didn't meet his demands.

"Of course, you could dispute about all this, no question, but we didn't want to be put under pressure by someone. The fact is that Schmier wrote us an e-mail telling us that he is not willing to take part in this event and that we have to look for another band if we don't change the poster.

"I personally regret his decision, but I accept it. It also doesn't make sense to expatiate upon this little controversy on the forums. All this draws off the attention from the actual event.

"I'm sure that all those DESTRUCTION fans out there would have been happy about their performance, even if there's a 'smaller' band logo on the poster. I on my part would never break my friendship with Schmier because of this trifle.

"I hope he thinks the same. We know each other for 25 years and we always had a lot of fun together! And it should stay like this.

"The few real friends of Chris attended his funeral. Nonetheless I missed a couple of people. I admit that my relation to Chris hadn't been the best in the last years of his short life. But the people that worked together with him until the end tried everything to help him and to give him courage to face life.

"In this regard I want to name Toto as producer of 'The Final Sign of Evil' as well as Grave Violator, one of our primary guitarists. Both have selflessly taken care of Chris until the end. But all that is nothing compared to what his loving mother had to suffer. We want to give something back to her with this concert, and we want to keep her son's memory alive. For me, those are the important things in life and those are also the reasons for which we arrange this show.

"I want to avoid that this thought falls behind because of that ongoing discussion.

"I don't think that Chris would have wanted this. We've put together a fair package of bands and I'm especially proud of this. Regrettably the reason for such a meeting is a sad one, but I hope that this absolutely unique billing of cult bands will be a success for all participants.

"And I don't let anyone talk this down." 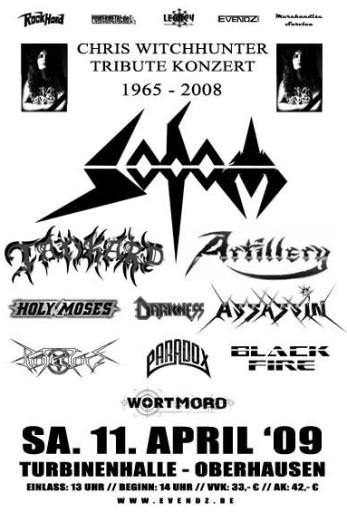