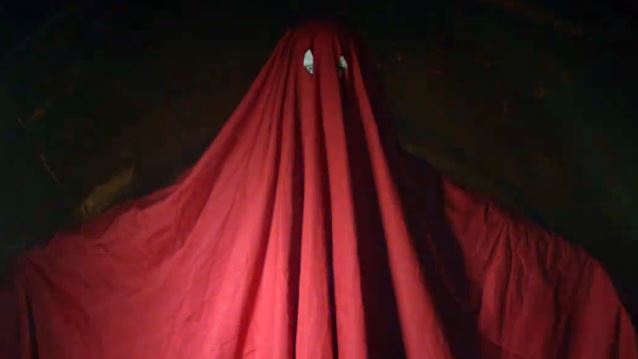 A teaser for the clip can be seen below.

In a recent interview with BBC Radio 1's "Rock Show", SLIPKNOT singer Corey Taylor described "The Devil In I" as "completely different" from the song "The Negative One", which was released on August 1 via the band's official web site. "It's more melodic, but it's dark, [and] it's powerful, man," Taylor said about "The Devil In I". "It's something different."

SLIPKNOT issued and quickly fulfilled a casting call on August 17 for fans — also known as "maggots" — to appear in the video for "The Devil In I". The call for extras to appear as "human maggots," requiring that applicants be between 20 and 35 years old and "comfortable to be shooting in barefoot," was issued that weekend and was no longer accepting submissions by August 18.

The shoot was scheduled to take place on either August 22 or August 23 in the Los Angeles area.

".5: The Gray Chapter" is the first SLIPKNOT album without bassist Paul Gray, who died in May 2010, and drummer Joey Jordison, who was dismissed in 2013.

Tickets for the SLIPKNOT's "Prepare For Hell" tour, which will also feature KORN and KING 810, went on sale Friday (September 5). The trek kicks off on October 29 in El Paso, Texas, just a few days after the group's two-day Knotfest event is held in San Bernardino, California.