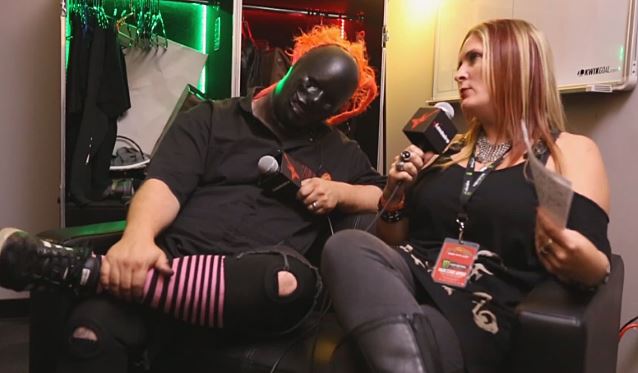 "Loudwire Nights" host Full Metal Jackie conducted an interview with SLIPKNOT percussionist Shawn "Clown" Crahan at this year's Rock On The Range, which was held May 15-17 at MAPFRE Stadium (formerly Crew Stadium) in Columbus. You can now watch the chat below.

Asked when fans can expect to see the follow-up to SLIPKNOT's latest album, 2014's ".5: The Gray Chapter", Crahan said: "I'm not sure, 'cause we're slated to tour the rest of this year and some of next year. So… I mean, it takes six months to make a record… [And then] marketing and preparation… So, you know, if we're touring the rest of this year and some of next year, it could be as early as the first quarter of 2017. I mean, I'm just giving you actual facts. But we're writing now. We're in the rhythm of writing all the time, which is a very helpful tool, because we love doing that. So it's not a waste of time. It's not anything that won't get used. Usually, if we're writing, it's passion. Whether it's written here [on the road] or in someone's garage or basement, it's all for the better cause. So, who knows?! Hopefully soon."

Asked what musical direction the next SLIPKNOT album might take, the band's guitarist, Jim Root, told U.K.'s Metal Hammer magazine: "Man, that's really tough. I mean, there's a couple of different ways to approach it. We could approach it like we did, say, [2001's] 'Iowa' compared to the first release. Or we could approach it like kind of picking up where [2004's] 'Vol. 3: (The Subliminal Verses)' or where 'The Gray Chapter' left off. Do we go more aggro and more heavy and more death metal, or do we go more cerebral or more PINK FLOYD, more kind of experimental? It's hard to say. And I think because we never know what we're gonna do is why we end up just doing what we do. And it comes off as being very organic and not contrived, and that's the case. Don't overthink what it's gotta be or what it should be or shouldn't be."

It was six years between 2008's "All Hope Is Gone" and last year's ".5: The Gray Chapter", during which SLIPKNOT dealt with the death of bassist Paul Gray in 2010 and the dismissal of drummer Joey Jordison in 2013.

The summer jaunt follows a brief spring run that SLIPKNOT launched on April 25 at the Fort Rock festival in Fort Myers, Florida and ended on May 16 in Grand Rapids, Michigan.