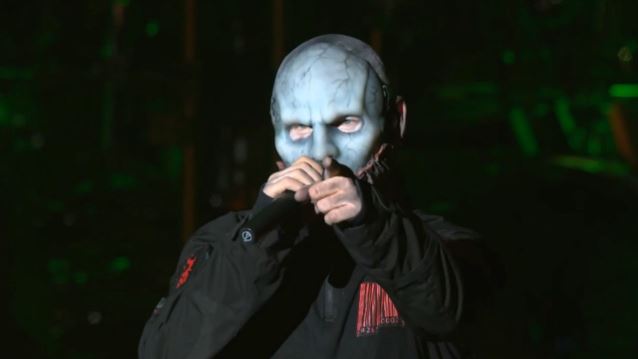 SLIPKNOT's new lineup made its live debut last night (Saturday, October 25) as part of the band's Knotfest in Devore, California.

Professionally filmed video footage of the entire concert can be seen below.

More than 20,000 people were expected to pack the San Manuel Amphitheater for Knotfest, which will close out Sunday with a second headlining set from SLIPKNOT, as well as turns from VOLBEAT, FIVE FINGER DEATH PUNCH and two dozen other acts.

SLIPKNOT's long-awaited fifth studio album, ".5: The Gray Chapter", caps a very turbulent period for the masked rockers in which they dealt with the death of Paul Gray and the firing of drummer Joey Jordison, both longtime members and songwriters.

SLIPKNOT's only competition for next week's No. 1 slot on The Billboard 200 chart appears to be Neil Diamond's "Melody Road", which is expected to shift between 70,000 and 80,000 in its first week of of release.