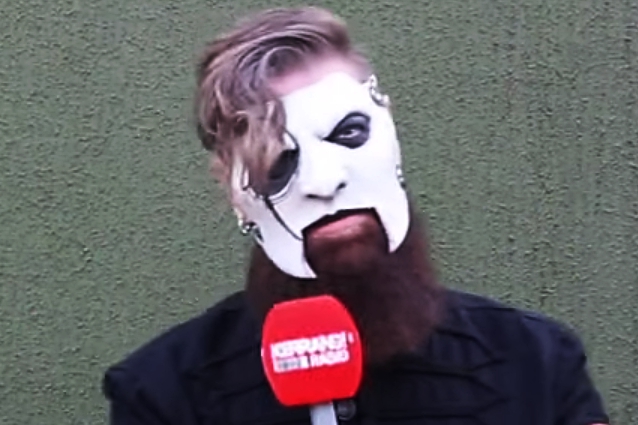 SLIPKNOT guitarist Jim Root was interviewed by Sophie K of Kerrang! Radio at this year's Download festival, which is taking place this weekend at Donington Park in Leicestershire, England. You can now watch the chat below.

Asked if he would agree with singer Corey Taylor's assessment that SLIPKNOT's upcoming album, "We Are Not Your Kind" will be "'Iowa' levels of heavy", Root said: "No. I would never in a million years compare anything we've done to anything we've previously done. I don't believe in it. I think it's bad, because no matter… I mean, you could say, 'Oh, we're gonna write the heaviest album of all time,' or, 'We're gonna write an album that sounds like 'Iowa'.' Even if we set out to try to do so, it would never compare. We're not those people anymore. We're not that band anymore. That was a place in time; it was a snapshot of who we were at that time; and to try to recreate that, I think, would be contrived, and our fans would see right through it. And even if it was a great, really heavy, aggressive, organic record like that, the comparison wouldn't match up to it. So I like to look at everything as an evolution. And if I'd compare anything, it wouldn't be the songs themselves; it might be the process itself."

Elaborating on how the recording process for "We Are Not Your Kind" was similar to that on "Iowa", Root said: "When we recorded 'Iowa', we jammed, we went through the songs, we played as a band and we recorded as a band. We hadn't done that… The last time we did that was 'Vol. 3: (The Subliminal Verses)' [2004], so 'All Hope Was Gone' [2008] and even '.5: The Gray Chapter' [2014]… We played a few of the tunes on 'The Gray Chapter' as a band, but mostly that was built off of demos. So this album, the demos were built; we worked on the demos; we got together; we were in the studio; we jammed with Jay [Weinberg, drums]; we did a number of takes with the click, a number of takes without the click, and it was always the ones without the click that made it. But it was us as a band playing, and that gave that push and pull and that organic feel. Now, sonically, it's gonna be different. That's another thing — sonically, you'll never match something you've done before. It's hard to chase a vibe and catch a vibe. That's why I don't necessarily enjoy it when bands cover other songs. You'll never recreate what has been done, especially if it's something that's legendary and classic."

Asked what inspired the "rage" in the new SLIPKNOT songs, Root said: "There's always something to rage about, right? Just look at the day and age we're living in. For me, it's just trying to learn my craft, as far as my demos, before it gets to the rest of the guys in the band. It's trying to make something that I haven't made before, trying not to repeat myself. It's a learning process, the whole thing. So if I'm doing it, I'm just trying to be, like, 'Oooh.' If I catch a vibe that's really cool, I'll just go with it. I'll be, like, 'I've never written anything like this before. This is great.' To see it grow and then come to the finishing stages of mastering, and then to even be playing something live, fuck, that's gratifying. So, it's just trying to outdo yourself, maybe."