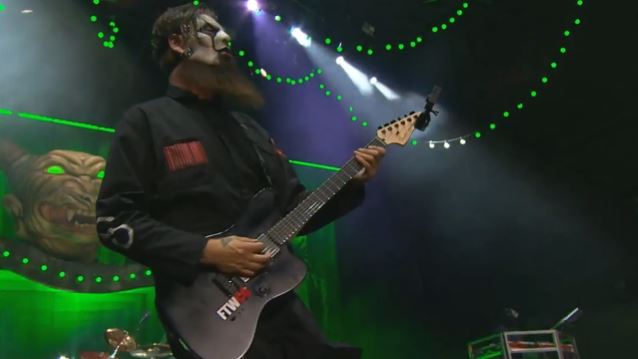 SLIPKNOT guitarist Jim Root confirmed to MusicRadar.com that he played bass on "six, maybe seven tracks" on the band's latest studio album, ".5: The Gray Chapter", following the 2010 passing of SLIPKNOT's original bassist, Paul Gray. "I can't even remember which [songs I played bass on]; I'd have to sit down with the guy who played bass on the other tracks to find out."

He continued: "Some of the lines were taken from the demo versions that I recorded in my garage, because they were moody, and had a unique vibe that was too hard to recreate. 'Goodbye' uses the full bassline that Corey [Taylor, vocals] recorded for his demo.”

Asked if it was always his intention to play bass on the record, Root said: "I was prepared to do it if it had to be done, but I didn't want to do it. Both the bandmembers and, according to management, our fans, wanted to see somebody in there."

He continued: "No one will ever replace Paul, and Paul will always be a part of what we're doing. But for me, if we're going to have a guy onstage, then it should be all or nothing."

Root added: "There was a speck of me that out of respect for Paul didn't want somebody new to play everything. But at the same time, if we're moving on in this way, why hold on to things? I also didn't want to play bass because of the workload. I was already writing most of the songs, so that's a lot of playing, arranging and layering just for guitar."

A disgruntled former drumtech for SLIPKNOT last month revealed the identity of the band's newest members by posting a picture of a backstage call sheet on Instagram.

The sheet, posted by Norm Costa, shows the names Jay Weinberg, their new drummer and Alessandro Venturella, the bassist. While the sheet doesn't point out who is who, Venturella's identity was pretty much revealed by accident in SLIPKNOT's music video for "The Devil In I", where Venturella's hand tattoos were visible.