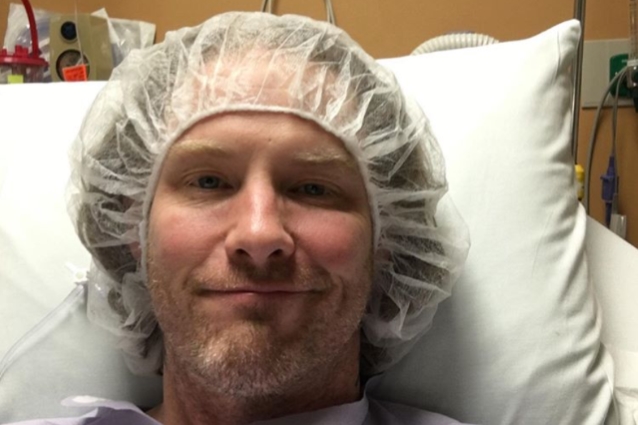 Corey Taylor is recovering after undergoing surgery on both his knees.

Earlier today (Friday, May 10), the SLIPKNOT and STONE SOUR frontman posted an Instagram photo showing him lying in bed and flashing a smile for the camera while wearing a hospital gown and cap. He included the following caption: "Surgery in both knees today- soon I’ll be worth Six Million Dollars!! See you all soon! #bionic #leemajors"

Immediately following the surgery, Taylor posted a video update on his condition, saying: "Hey, everybody. Just got out of surgery. The doctor said everything was great. Just cleaned up a bunch of stuff in there. And I will be back on stage in no time. So, I'll see everyone on 'Kimmel', see everyone on the 19th in Garden Grove, and I can't wait. Thank you to everybody for their well wishes and everything, and we'll see you soon."

Corey's next live appearance is scheduled for May 17, when he will join his SLIPKNOT bandmates as they perform on "Jimmy Kimmel Live!" Taylor will also play a solo show on May 19 at Gardenamp in Garden Grove, California.

Back in 2016, Taylor underwent emergency spinal surgery when it was discovered that he had been walking around for years with a broken neck. He later said that he thought the issue might have originated way back in 1999, when he took a four-foot fall from an Ozzfest second stage and landed on his head.

SLIPKNOT's new album will be released on August 9 via Roadrunner. The disc will include the song "All Out Life", which was released last October. The track's accompanying video was directed by the band's own M. Shawn Crahan.

Surgery in both knees today- soon I’ll be worth Six Million Dollars!! See you all soon! #bionic #leemajors

My little Tenderoni is in surgery today! Please comment with your best dad joke below to help me keep him laughing! ??