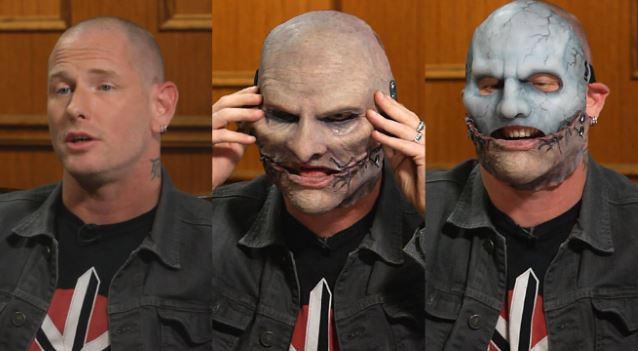 SLIPKNOT frontman Corey Taylor sat down with Larry King on the Emmy-nominated series "Larry King Now" and reflected on the death of the band's longtime bassist, Paul Gray, previewed the upcoming "Prepare For Hell" tour, and even tried on his new stage mask for Larry. Check out the clips below.

On how his band handled Gray's untimely passing and if he thinks Gray would have enjoyed SLIPKNOT's new album, ".5: The Gray Chapter":

"I think he would've loved it. We… I mean, it's essentially the story of the last four years — dealing with the aftermath of his death and all of us trying to kind of get back to a place where we wanted to make music again."

On a new movie that he will be producing:

"It's more of a supernatural kind of thing where it's... without giving too much away, it kind of deals with the purgatory, which I also think is very interesting."

SLIPKNOT's only competition for this week's No. 1 slot on The Billboard 200 chart appears to be Neil Diamond's "Melody Road", which is expected to shift between 70,000 and 80,000 in its first week of of release.