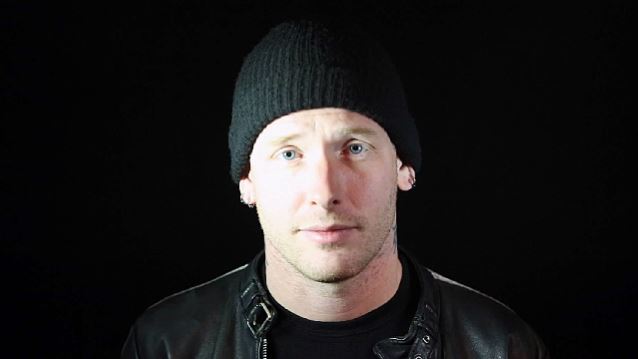 In the four-minute clip below, Corey Taylor, singer of SLIPKNOT and STONE SOUR, talks to The You Rock Foundation about his struggles with depression, how he overcame them with music, and reminds those who are still suffering that they are strong enough to do the same.

"When you're at that age, everything's developing still, so you don't have the coping mechanisms to deal with that.

"I think the more the people don't get to work things out, they don't know how to do it later on as well."

He added: "I was homeless, off and on, for about two years. And I didn't know what I was gonna do, I didn't know how I was gonna do anything with my life. I didn't have any money, I didn't have any notebooks. I was carrying my clothes around with me in a trash bag, living under a bridge on the south side of Des Moines. And it was heavy duty; it was a really, really dark time for me. I definitely got to the point where I was ready to end it all. I had the razor in my hand and I started cutting myself. But it was a pressure valve kind of situation, where it wasn't like I was going to end it, I just needed to feel something real to snap me out of it. And I did, luckily. I ended up swallowing a bunch of pills. My grandma took me to the hospital, they fed me ipecac, I threw up, then they had to forcefeed me liquid charcoal to get my stomach to settle down. And that was probably the lowest moment of my life, because I'd done it to myself. The only thing that really helped was writing. It felt like when I was writing I could work it out and really be able to get my head around it. It provided a way for me to get that primal scream out without having to scream. The scream was there if I needed it, but also being able to sing and really get a handle on the emotions that I was feeling without losing my mind. It was the sanity that I needed to kind of get my feet underneath me and move on and put a lot of that stuff behind me."

In a 2006 interview with MTV, Taylor talked about how he, as a full-blown alcoholic, "tried to jump off the balcony of the eighth floor of the Hyatt on Sunset [Boulevard] on November 14, 2003." He said, "Somehow [my then-wife] stopped me. It wasn't the first time I tried to kill myself, either."

"I took a good, long look in the mirror and I hated what I saw," he said. "I was very bloated, I looked like crap. It wasn't me. And that was it. I haven't touched a drop since."

"The first year I was sober was probably the worst year of my life," Taylor continued. "My immune system was screwed. I completely isolated myself. I was weak all the time. I didn't know who I was. Sometimes you define yourself by your vices, and I was known as the partyer. I was the guy that was always ready to go out and do shots. And all of a sudden, I had to figure out who I was without that, and it took me a long time. I pushed my wife away for a while and was a really selfish, cold dick."

For more information on The You Rock Foundation, visit yourockfoundation.org.