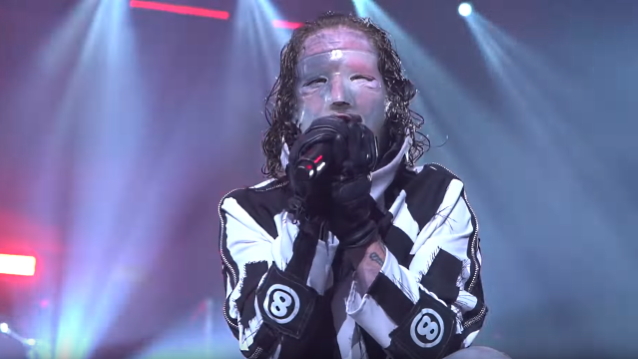 SLIPKNOT and STONE SOUR frontman Corey Taylor has argued against the use of drugs to enhance creativity, insisting that "you sound better and play better and you have a better energy" when you're not under the influence of psychedelic drugs.

Taylor, who has been open about his battle with addiction, spoke about musicians using drugs during an appearance on the latest installment of the "Marshall Podcast".

Addressing the widespread belief that musicians' ability to write music is improved when they are drinking or using drugs, Taylor said (hear audio below): "I think it's encouraged by the people who are actually embedded in that. They want people to think that it's hard to create without chemicals. And that's addict language, because I used to do that for me from a performing standpoint. I was convinced that I couldn't perform if I didn't have a Jack and Coke — at least one. And then that became two. And then that became half a bottle. That's addiction. So I think that's a myth perpetuated by addicts who are looking for people to reinforce their dependency. And it's easy — especially when you see the antics and hear the, 'Such a great time.' And there were great times. However, that had nothing to do with making an album; that had nothing to do with writing and performing and using your ability. That was the after-effect; that was the after-party.

"I have only been loaded in the studio twice, and I didn't like it one bit, 'cause I couldn't control anything," Corey continued. "And then listening back to shit, I was, like, 'Oh, this is horrible. Why did I do that?' So, I've really tried to kind of kill that myth for people.

"If that's what you think, then, I mean, God bless you; that's fine," he added. "If that's what works for you, that's what works for you. I'm not gonna convince you otherwise. However, it is not the law of the land. You don't have to be loaded to fucking create. You don't have to be loaded to fucking have a good time. I actually think you sound better and play better and you have a better energy when you're not [loaded]. Because then the focus is on you. There are no excuses after that. It's you, and that's the rawness of what we do."

Taylor is not the only high-profile rock musician who has spoken out against the drugs-and-rock-and-roll myth in recent years. Back in 2017, MÖTLEY CRÜE bassist Nikki Sixx told MSNBC that his addiction actually stifled his creativity and made it impossible for the band to function properly. "I was thinking about 1987 and how I was barely able to get an album done and a tour," he said. "And, actually, the tour was canceled, the last part of the tour. And in 2017, I'm able to do a radio show, write books, do photography, be a better husband, a father, and be part of these conversations that are happening. So I really think that sobriety gives you more energy and more creativity."

At Rock To Recovery's second annual awareness event and benefit in September 2017, Taylor was honored with the "Icon" award. The singer, who tried to commit suicide in 2003 by attempting to jump off a hotel balcony while struggling with alcoholism, gave an inspiring acceptance speech in which he touched upon his struggles with depression and anxiety and how he's attempted to work through them with therapy, healthy habits and sobriety.