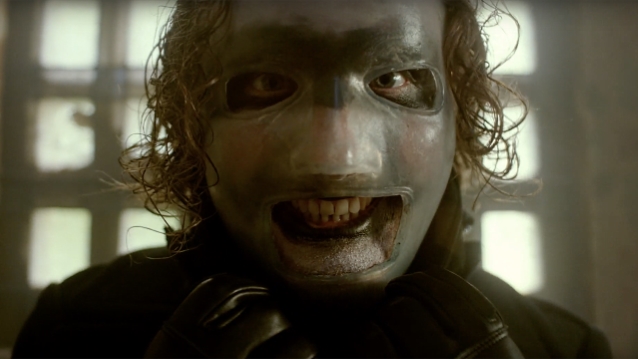 Raquel Figlo of Heavy Metal Hill recently conducted an interview with SLIPKNOT frontman Corey Taylor. A couple of excerpts from the chat follow below.

On the upcoming SLIPKNOT album, "We Are Not Your Kind":

Corey: "It is really dark. The music falls in between 'Iowa' and 'Vol. 3: (The Subliminal Verses)'. It is experimental, but heavy as hell. It's aggressive, but has tons of melodies. I think people are really going to dig it.

"The crazy thing I have noticed over the last couple years I have seen a shift in the way people look at me. I thought having an opinion was something that was cool, and now I'm becoming a meme. I feel everyone is starting to turn on me, so I am using that to my advantage. I am, like, 'All right, you want a villain? I will give you a fucking villain.' That is kind of where I am in my life — not giving a shit. I am basically saying, 'You don’t have to like me, but you are going to love me anyway.'"

On working with special effects legend Tom Savini on his new SLIPKNOT mask:

Corey: "That was the coolest thing ever. He had us over to his house. It was the coolest sci-fi horror museum ever. My mask got molded at his school outside of Pittsburgh. I worked with his associate Jason Baker. The fan in me is still freaking out."

What fans can expect to see on SLIPKNOT's upcoming tour:

Corey: "We are trying to find new territory we have never done before, not just set-wise but visually from a live standpoint. We are constantly trying to see what can be explored artistically. This is where [SLIPKNOT percussionist] Clown [M. Shawn Crahan] is the best in the business; his mind is like a beehive of art. He is constantly trying to find ways to outdo everyone. It is pretty inspiring. It's encouraging to see how invested people are in the music and everything that surrounds it. It reminds you why you love music in the first place.

"We are constantly evolving. This band is always trying to find new territory than doing something we have already done, which is tough to do when you are trying to give people a sense of familiarity. It's like trying to keep plates spinning at all times. I think we are pretty adept at it, and this album is our stepping out with the new guys and they have gone above and beyond."

"We Are Not Your Kind" is scheduled to be released on August 9 via Roadrunner. The disc's first single, "Unsainted", was made available on Thursday, along with an official music video directed by Crahan.

"We Are Not Your Kind" was once again recorded at a Los Angeles studio with producer Greg Fidelman, who engineered and mixed "Vol. 3: (The Subliminal Verses)" and helmed SLIPKNOT's 2014 album ".5: The Gray Chapter".