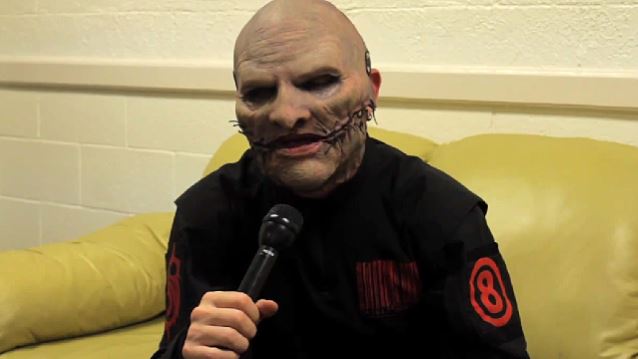 SLIPKNOT singer Corey Taylor says that Joey Jordison was fired from the group in December 2013 because SLIPKNOT's founding drummer and the other members of the band "just weren't able to work anymore."

During an appearance on HATEBREED frontman Jamey Jasta's official podcast, "The Jasta Show", Taylor declined to go into specifics about the reasons for Jordison's dismissal, explaining: "There's legalities [that are involved which prevent me from talking about it], but at the same time — and people need to realize this — there's respect. I'm not gonna talk about Joey's life, because it's not my place, and people need to realize that. If Joey wants to talk about the situation, he can. I can only talk about how it pertains to this band, and the only way I've been able to sum it up — and this is the broadest term — is that sometimes you're on the same road, and you'll reach a T section, and sometimes you turn together, and sometimes you split. And this time we split. It was just that simple. We just weren't able to work anymore. And that's it."

After Jasta commended SLIPKNOT for being "all class" in interviews about the split with Jordison, Taylor continued: "I'm not gonna sit here and dog somebody that I spent 15 years building something amazing with — I'm not gonna do that. And the fans need to understand that. And I think for the most part most of them do, but there's always gonna be those people who just want a little more so they can talk shit. And that's the only reason why they want the full story — so they can talk shit."

Asked if SLIPKNOT missed Jordison's "tones and his style and his presence" during the making of the band's latest album, ".5: The Gray Chapter", Taylor said: "You know… That's a great question, by the way. And I'd never really thought about it until you just brought it up. Because, at the time, you're just kind of trying to get through it. You've got this idea of what the album could sound like. Everybody's really positive, so you're not ignoring it, but you're just kind of charging through. There are definitely times where you miss his ability to, kind of, see. But me and [percussionist] Clown and [guitarist] Jim [Root]… It was kind of like the times where you miss [late SLIPKNOT bassist] Paul [Gray] and what he brought to it, and everybody, kind of, had to fill in those blanks."

He continued: "Me and Jim are the first ones to say that we learned so much from working with Paul that we've been able to take his, I don't wanna call it 'method,' but the way he used to do things, and we've applied it to what we did. And it was kind of like that with [Joey]. Joey, for the most part, was definitely a general in the studio, because he had such a great mind for it and knowing how to get the right kind of sonics and how to do certain thngs, and what the other potential for, like, ear candy or intros and stuff like that. So you kind of have to fill that blank in as well."

Asked if SLIPKNOT was "cracking the whip" on the new drummer — believed to be Jay Weinberg, son of longtime Bruce Springsteen drummer Max Weinberg — in the studio while the band was recording ".5: The Gray Chapter", Taylor said: "We were kicking his ass. Oh yeah. But he was loving it, man. Ah, dude, he was so into it. 'Cause he's a fan, you know?! There was a part of him that was kind of pinching himself that this was happening, but then the other part of it was just like, 'Let's fucking do it.' So it was really, really cool."

Taylor recently told Metal Hammer magazine that he would not answer whether drug use played a role in Jordison's dismissal, and confessed that he had not been in touch with his former bandmate. Taylor said, "I haven't talked to Joey in a while, to be honest. That's how different we are. It's not because I don't love him and I don't miss him. And it is painful; we talk about him all the time, but at the same time, do we miss him or do we miss the old him? That's what it really comes down to."

The identities of SLIPKNOT's new bassist and drummer have not yet been revealed, but both appeared — disguised in the same newly designed mask — in the video for "The Devil In I", the first single from the new album.