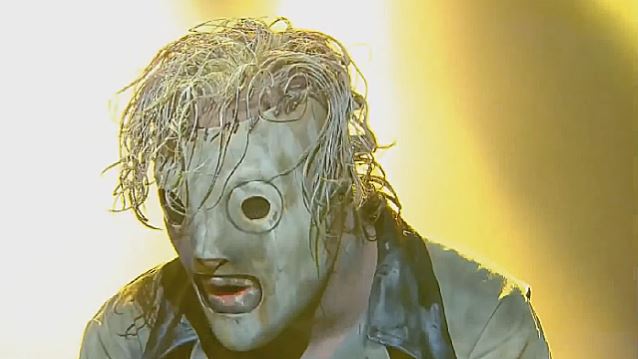 SLIPKNOT singer Corey Taylor says that he is "one of the most hated dudes right now" but claims that he "loves" being the topic of conversation among the band's fans because it helps "carry on the legacy."

Speaking to XFM's Ian Camfield on this week's "XFM Rock Show", Taylor said of the incessant Internet chatter and rumor mongering involving SLIPKNOT: "It'll definitely make you sleep on your side of the bed, man. It's pretty ridiculous. You stay as far away from the windows as possible."

He continued: "It gets weird with our fans, man. I mean, it's great to the point where it's like… there's almost, like, a 'Twin Peaks' vibe to it where people are reading into…

"At one point there was a whole message board dedicated to measuring the forehead of one of the models in 'The Negative One' video. I promise, this is true. And I'm reading this, going, 'Wow!'

"At one point, they had us killing JFK. I wasn't even alive then. But, apparently, the technology exists that SLIPKNOT, as a whole, could travel back to '63, pull the trigger, get right back out and right back into the studio…"

Taylor added: "I love it, though. I love it. I think it's great. Because, again, I've always said: I'd rather have people talking about me, whether it's negative or positive, than not talking at all. Because as long as your name's in that conversation, it's carrying on the legacy. And trust me, I'm one of the most hated dudes right now. You have no idea. The stuff that's coming out of some of these people's mouths… If I took any of it seriously, I wouldn't be on the mic with you right now, I'd be curled up in a foetal position on my bed, sucking on my own thumb, because it's ridiculous."

Asked about the perception that he is solely to blame for SLIPKNOT's dismissal of drummer Joey Jordison and Jim Root's departure from STONE SOUR, "That's the burden of being the frontman. [But] I'm not the boss. Trust me. I'm not the boss in either band. It's very much a committee. I help make decisions, but I don't make. But that's the perception."

He continued: "It is what it is. And, like I said, I'm a big boy. I can take it. I have a Hello Kitty pillow that I cry into every night. But that's not the point. It keeps me humble. It keeps me where I need to be.

"You just kind of have to take it and roll with it. People dog me now, but they'll love me later, and it's just the way it's always been."

Corey also had a light-hearted warning for anyone who bad-mouthed him.

"For all you trolls out there, I'm taking down addresses!" he said. "I'm pulling a 'Jay And Silent Bob Strike Back' and I'm coming to find all of you. I have a giant computer printout and you're gonna get socked up as soon as I see you."

SLIPKNOT's new album, ".5: The Gray Chapter", will be released on October 21 via Roadrunner.