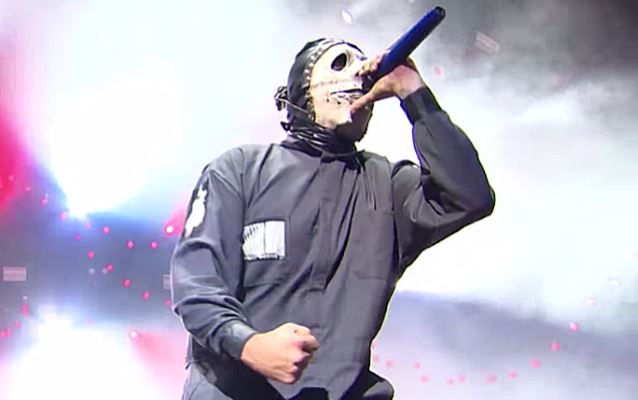 SLIPKNOT percussionist Chris Fehn was interviewed by the Portuguese radio show "Metal Global" when the band performed in Dublin, Ireland on January 14. You can now listen to the chat using the audio player below (beginning around the 10-minute mark).

Speaking about SLIPKNOT's decision to carry on following the tragic 2010 death of the band's bassist, Paul Gray, Fehn said: "It's a big part that's missing, and it was a very devastating thing to have happen to us. 'Cause he was such a big part of the family. Most importantly, I guess, I lost a friend, you know, more than… So that's kind of the biggest loss — him as a human being. SLIPKNOT comes second as far as how I feel about Paul. Just the time we would have together and the laughs and the tears and all that stuff. But I know that he loved us so much that he would want us to keep going, and to work hard and continue on something that he was a big part of."

Chris also talked about what it has been like to perform live without Paul, especially when SLIPKNOT first returned to touring in 2011 for a small run of shows in Europe.

"He [was] on my side of the stage, and there was a lot of things that we would do live, like on certain parts, that he and I would communicate visually or… you know, just do whatever," Chris said. "And when those parts come up now, I still want to do that with him, and he's not there. So it's still… He's just not gone yet. You know what I mean?! Which is a good thing. We still think about him a lot."

Gray was found dead at the age of 38 in a hotel room outside Des Moines, surrounded by drug paraphernalia. His death was ruled an accidental overdose of morphine and fentanyl, with his autopsy showing that Gray also suffered from significant heart disease.

Gray's widow, Brenna, revealed in an April 2011 interview with Revolver that her husband had agreed to get help for his drug problem just one day before he died on May 24, 2010.

SLIPKNOT is touring behind its new album, ".5: The Gray Chapter", which came out in October 2014 and topped the Billboard album chart six years after the release of its predecessor, "All Hope Is Gone".