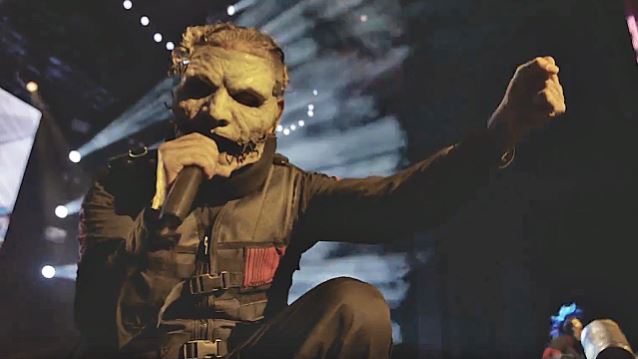 SLIPKNOT percussionist Shawn "Clown" Crahan has confirmed to Metal Insider that he and guitarist Jim Root will get together in early February to begin writing new music, but will not book any studio time just yet to start recording the follow-up to 2014's ".5: The Gray Chapter". That disc ended a six-year drought between SLIPKNOT albums during which founding bassist Paul Gray passed away in 2010 and drummer Joey Jordison was dismissed in 2013.

Crahan said: "The '.5 The Gray Chapter' cycle is over. One hundred and ninety shows, thirty countries, three years. I showed up in L.A. January 3rd, 2013 [to start work on the album], [and] I had to leave the tour early because my father-in-law passed away. I missed, like, five shows. I didn't get to end the cycle properly, but that doesn't matter, because I lost my father-in-law."

He continued: "Basically, we are taking until February and Jim Root and I are going to do something different. We are not gonna sit around while everyone goes and does their thing, because everyone does their thing. Some people rest, some people do other bands, whatever. All of us feel, I am talking about everybody — Corey Taylor, Jim Root — we all feel that for the last twenty years we have been doing it one way, so it would be nice to just like examine the song. So we are going to get together in February and we are going to work with different people, different places, make experiences and take the opportunity to get back into a rehearsal room with a lot of us and jam and not feel like a lot of pressure, like, 'Okay we have to get together and in three months write this album.' We want to spend the next year or so diving into the ability to write songs, and explore what we are to the world as musicians and songwriters. So we are very excited to be doing some things differently. We've got full support from the label and everybody around us, and we are going to dive into some very unique thinking, not unlike anything we have ever done. We are just kind of tired of how the pirate ship has gone. I don't really wanna row the oars anymore I want to be an officer or a general."

With SLIPKNOT closing out the touring cycle for ".5: The Gray Chapter", singer Corey Taylor will be regrouping with his other band, STONE SOUR, to record a new set in early 2017.

Crahan, meanwhile, is pursuing a career as a feature film director. His first effort, "Officer Downe", arrived in theaters and on-demand platforms on Friday (November 18).

Crahan said a while back that there's always been room for outside projects within the world of SLIPKNOT. "I feel the 'KNOT has always preached personal freedom," he said. "You know, 'Don't ever judge me.' That's what we do, man. We do what we want, we do as much as we want. We'll go shed light to what we are individually out onto the world and then we'll come together like we always do."