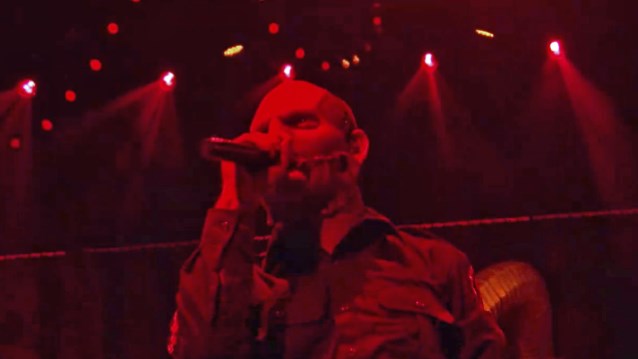 SLIPKNOT has released a live video for the band's song "Custer", shot at last year's Knotfest in Devore, California. The band shared the clip with SLIPKNOT's 18 million followers on Facebook and included a link for their fans to purchase tickets for their 2015 tour. Check out the video below.

"Custer" is the latest single from SLIPKNOT's 2014 album, ".5: The Gray Chapter", which came out in October. Singer Corey Taylor told Kerrang! magazine about the song: "This is focusing that anger towards the outside world — the people who on one hand want to make us martyrs, but at the same time want to make us bastards. And metaphorically it's about charging into our last stand, and it's basically saying, 'You know what? Just when you think you've written our history, we're going to rewrite it again, and basically show you that we can take all the abuse that you put out there, and we're not going to lose a step, we're not going to lose an inch, we're not going to lose any ground — we're going to keep coming."

SLIPKNOT has unveiled the details of a massive summer headlining tour dubbed "Summer's Last Stand". The trek kicks off on July 24 in West Palm Beach, Florida, wrapping up six weeks later on September 5 in Dallas, Texas. Joining SLIPKNOT on the road trip will be LAMB OF GOD, BULLET FOR MY VALENTINE and MOTIONLESS IN WHITE.

The summer jaunt follows a brief spring run that SLIPKNOT will launch on April 25 at the Fort Rock festival in Fort Myers, Florida, ending on May 16 in Grand Rapids, Michigan.