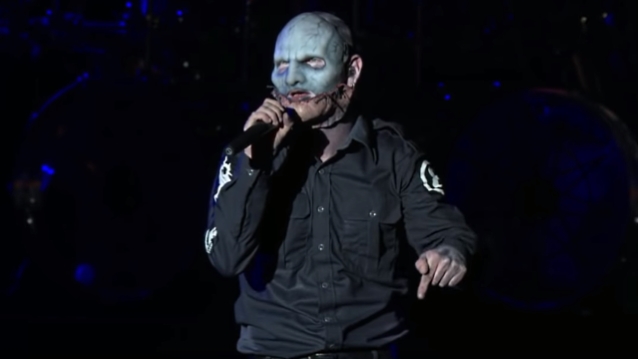 SLIPKNOT has shared another teaser video for what will be the band's big reveal on Thursday, May 16. As with the previous two teasers, the new one-minute clip, which is captioned "You've Killed The Saint In Me", features brief glimpses of the members' new masks interspersed with footage from previous years.

The members of SLIPKNOT are expected to unveil brand-new costumes to coincide with the release of their sixth studio album, which will arrive on August 9 via Roadrunner.

Because SLIPKNOT's first performance in more than two years is scheduled to take place on the Friday, May 17 episode of "Jimmy Kimmel Live!", the band is widely expected to reveal its new onstage outfits ahead of its appearance the program.

SLIPKNOT's new album will include the song "All Out Life", which was released last October. The track's accompanying video was directed by the band's own M. Shawn Crahan. The disc was once again recorded at a Los Angeles studio with producer Greg Fidelman, who engineered and mixed SLIPKNOT's 2004 album "Vol. 3: (The Subliminal Verses)" and helmed 2014's ".5: The Gray Chapter".