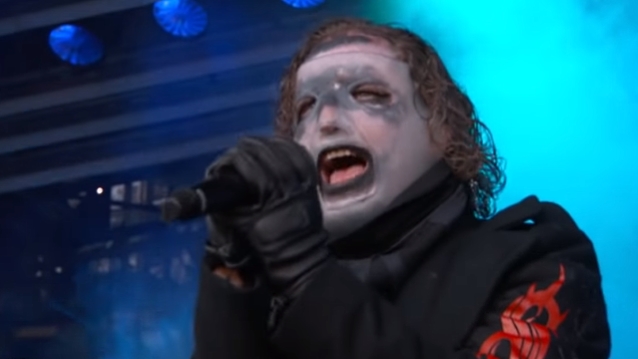 SLIPKNOT performed two new songs during Friday night's (May 17) episode of "Jimmy Kimmel Live!" The band played "Unsainted", which was unveiled on Thursday, and "All Out Life", which was made available last October as a standalone single. Only "Unsainted" aired during the program, which is taped in front of a live studio audience and produced by 12 05 AM Productions LLC in association with Jackhole Industries and ABC Studios.

"Unsainted" is the first single from SLIPKNOT's sixth album, "We Are Not Your Kind", which will be released on August 9 via Roadrunner. The song's accompanying video was directed by the band's own M. Shawn Crahan.

Thank you, Los Angeles. It’s good to be back. Watch us on @JimmyKimmelLive - tonight on ABC. #KIMMEL pic.twitter.com/qApMjNOssw