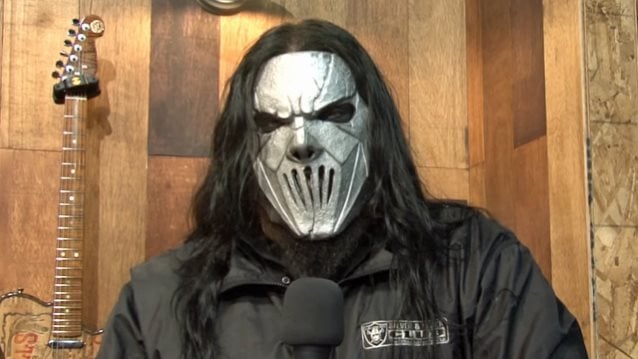 David "Gus" Griesinger of BackstageAxxess.com conducted an interview with SLIPKNOT guitarist Mick Thomson at last month's NAMM show in Anaheim, California. You can now watch the chat below.

Asked about SLIPKNOT's current status, Thomson said: "We just finished… We spent a long time… well, a couple of years touring, but then there was a whole year before that of writing and recording and all that shit. So we have a little break right now. I think Corey's [Taylor, SLIPKNOT singer] out doing his own stuff. Or if he isn't, he's about to be. So we're gonna work on writing some shit, and we'll be probably back out on the road after we do another record."

Thomson recently underwent spinal surgery at Beverly Hills Spine Surgery in Los Angeles, California. Thomson revealed the surgery via a post on his Instagram account, sharing an X-ray of his spine and writing: "I recently joined the cyborg club. Sore as fuck but hope to be back to mid-2000s banging by our next record cycle. Should probably just have every disc replaced all the way down to be safe. Dr. [Brian] Perri and the entire staff were awesome."

Thomson is the third member of SLIPKNOT to undergo spinal surgery in less than a year. Fellow guitarist Jim Root underwent disk replacement surgery last October, while Taylor had emergency spinal surgery in June 2016 when it was discovered that he had been walking around for years with a broken neck.

Taylor told The Pulse Of Radio that he discovered the damage to his spinal cord almost by accident. "I'd gone to get just a routine physical, and I was describing all these symptoms to my doctor, and he scheduled me an appointment with a specialist, a spinal specialist," he said. "They sent me in for an MRI, and I went in not knowing how serious it was. And within two days I was having surgery because that's how bad it was."

Root revealed what happened to him in December on "The Jasta Show" podcast, saying: "I had this really sharp pain in my shoulder blade for, like, two and a half, three months. It just would not go away, and it was starting to freak me out; like, this is bad. That evolved into my left arm kind of going numb a lot. It just got to the point where I couldn't ignore it anymore and I went and got an MRI."

Root was told by the doctor — the same doctor used by Taylor — that he had blown out several disks in his neck and needed to replace three of them or face permanent nerve damage.