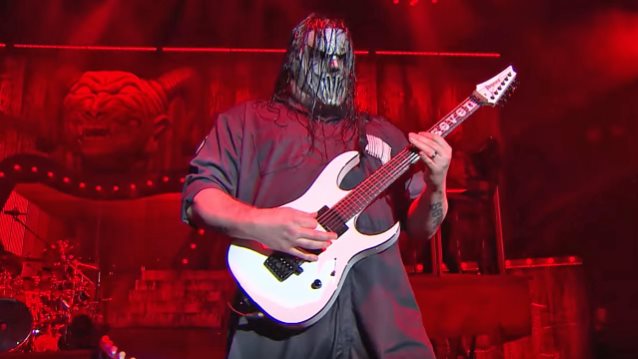 Thomson revealed the surgery via a post on his Instagram account. He shared a flexion and extension X-ray of his spine and wrote in an accompanying note: "I recently joined the cyborg club. Sore as fuck but hope to be back to mid-2000s banging by our next record cycle. Should probably just have every disc replaced all the way down to be safe. Dr. Perri and the entire staff were awesome."

Thomson is not the only SLIPKNOT member to have problems with his spinal cord. Fellow guitarist Jim Root underwent disk replacement surgery last October, just two days after the band's headlining performance at the Louder Than Life festival in Louisville, Kentucky.

Root was the second SLIPKNOT member to go under the knife in 2016 after singer Corey Taylor, who had emergency spinal surgery in June when it was discovered that he had been walking around for years with a broken neck.

Root revealed what happened in a December 2016 interview on "The Jasta Show" podcast, explaining: "I had this really sharp pain in my shoulder blade for, like, two and a half, three months. It just would not go away, and it was starting to freak me out; like, this is bad. And that evolved into my left arm kind of going numb a lot. And it just got to the point where I couldn’t ignore it anymore and I went and got an MRI."

Root continued: "I think it's exactly the same thing that Corey went through just previous, so I went to the same doctor that he went to."

After undergoing an MRI, Root was told by the doctor that he needed surgery as soon as possible, explaining that the guitarist had blown out several disks in his neck and needed to replace three of them or face permanent nerve damage.

With its intensely physical live show, everyone in SLIPKNOT has always been prone to injuries, as percussionist Shawn "Clown" Crahan explained to The Pulse Of Radio a while back. "Broken bones, broken fingers, broken arms, clavicles, ACLs, pelvic bones, tailbones, ribs, vertebraes...injuries go on, but every band's got that," he said. "I don't like to really glorify it, as much as I like to just say, 'This is real.'"

Root said he was about "90 percent" recovered as of two months ago, although he still had some residual pain in his nerves and was not sure if he would be able to bang his head while playing live again.

Taylor admitted last year that his injury had a huge impact on his daily life. "It was affecting so much stuff with me, and all because of a compacted disk that had basically pinched off all the spinal fluid," he said. "So it was pretty crazy."

I recently joined the cyborg club. Sore as fuck but hope to be back to mid 2000s banging by our next record cycle. Should probably just have every disc replaced all the way down to be safe. Dr. Perri and the entire staff were awesome.