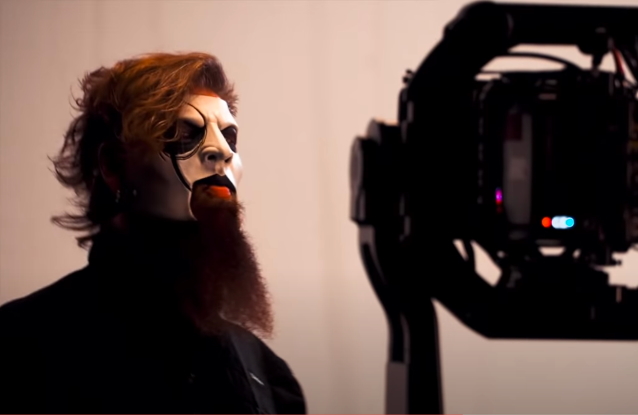 Behind-the-scenes footage from the making of SLIPKNOT's "Unsainted" video can be seen below. The clip, which was once again directed by the band's own M. Shawn "Clown" Crahan, contains nods to popular landmarks in SLIPKNOT's hometown of Des Moines, Iowa, including seating from the Iowa State Fair Grandstand, and an upside down Iowa Capitol golden dome.

"Unsainted" is taken from SLIPKNOT's latest album, "We Are Not Your Kind", which came out in August. The disc sold 118,000 equivalent album units in the U.S. in its first week of release to land at position No. 1 on the Billboard 200 chart. Furthermore, the album made an impact worldwide with No. 1 debuts in the United Kingdom, Mexico, Australia, Canada, Japan, Ireland, Belgium, Portugal and Finland, as well as Top 5 debuts in Germany, France, Norway, Italy, Austria, Sweden, Switzerland, The Netherlands, Poland, Spain and New Zealand.

SLIPKNOT guitarist Jim Root told Kerrang! about "Unsainted": "Before we even started writing this record, Clown had been like, 'I want to get a choir.' He was thinking in terms of a children's choir, like a PINK FLOYD 'The Wall' kind of thing, but we ended up getting a regular choir, and they took a version of the melody line from the original guitar line that started the demo song, which is a variation of the chorus riff. The choir did what they did, and to me it turned out to be pretty epic. I heard someone compare it to 'You Can't Always Get What You Want' by THE ROLLING STONES, and I think that's a pretty ambitious comparison, but I'll certainly take it. [Laughs]."