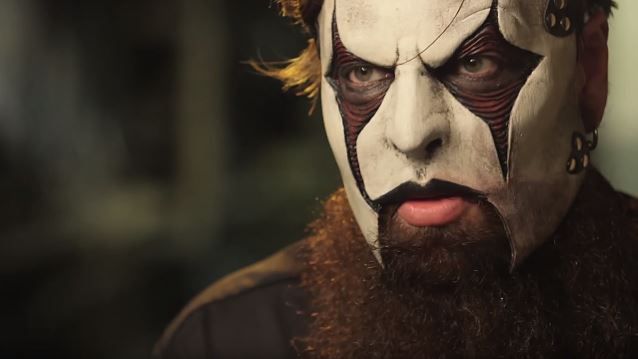 SLIPKNOT guitarist Jim Root underwent disk replacement surgery on Tuesday (October 4) — two days after the band's headlining performance at the Louder Than Life festival in Lousville, Kentucky. He wrote on his Instagram account: "[It] seems as if fractured vertebrae and hemorrhaged disks are an occupational hazard for metal bands. So early in the morning after Louder Than Life, I flew out for disk replacement surgery. Had the procedure [Tuesday] morning and other than being a bit sore and spun out from jet lag and Norco's [opioid pain medication], it's all good."

He added: "Although I won't be as 'mobile' onstage as before, I'm looking very forward to the upcoming Knotfest shows and places we'll be going in between."

Root is the second SLIPKNOT member to go under the knife this year. Vocalist Corey Taylor had emergency spinal surgery in June when it was discovered that he had been walking around for years with a broken neck.

Jim recently talked to The You Rock Foundation about the often overlooked hardships of the touring life of musicians and the toll it has taken on his mind and body. He said: "I'm extremely lucky to be doing what I'm doing right now and I work very hard at maintaining this career and living this dream that I'm living, but there's also a price to pay. I mean, we give a lot of ourselves and every day… It's not like we're playing the show 24 hours a day, and that's really the only part of the day that feels normal to me. The rest of the day is occupying your mind with things that don't take you to the dark side of the mind, so to speak, and that can be tough in itself. I think that's why with what we do for a living, a lot of people do turn to drugs and alcohol and things like that. And I tried that as well. I think everybody kind of goes through that phase, and for some people, what starts out to be a social things ends up becoming a medicative sort of thing — whether they're using it to kind of shut off all these problems that are around them or that they have in their mind, but at the end of the day, it's not really solving anything."

SLIPKNOT's early November appearance at Knotfest Japan will likely to be the band's last show in support of its latest album, ".5: The Gray Chapter", which was released in October 2014.

It's been awhile since I've posted... a quick update before I disappear again. First of all, many many thanks to all of you for the birthday wishes. Thank you. From the bottom of my heart I appreciate it. 2nd of all... seems as if fractured vertebrae and hemorrhaged disks are an occupational hazard for metal bands. So. Early in the morning after Louder Than Life in Louisville I flew out for disk replacement surgery. Had the procedure this morning and other than being a bit sore and spun out from jet lag and Norco's it's all good. Although I won't be as "mobile" onstage as before I'm looking very forward to the upcoming Knotfest shows and places we'll be going in between... And lastly. That wasn't quick. I spent way too much time typing all this out and most of you guys will lose interest and probably not even read the entire thing! Dicks. ? this message brought to you by Norco narcotics. See ya.... #neckbreaker #ughlife #knotfest #yermother #sweetfuckinbooties.