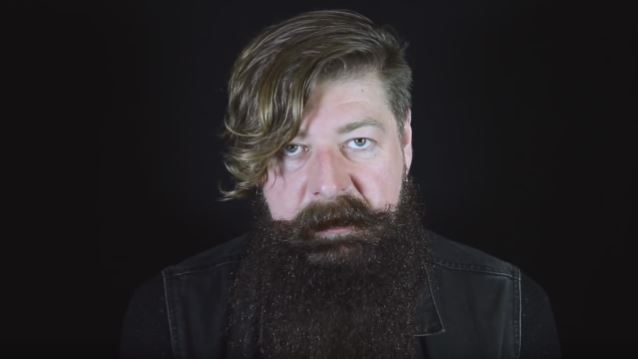 Jim Root, one of the two guitarists for SLIPKNOT, spoke to The You Rock Foundation about how he has struggled as an outsider with turbulent thoughts throughout life and how he has used his artistic career path to distract him from them. As someone who is most comfortable playing behind a mask on the stage, music gets him out of his head and gives him strength to continue.

Said Root: "I feel weird talking about it, because how can I, as the guitar player of SLIPKNOT, sit here and say, 'Oh, I have trouble.' You know what I mean? 'Cause I think the average person will probably look at me and say, Oh, yeah, but you're a fucking rock-star guy who plays guitar…', whatever, and this and that.

"Yes, it is extremely lucky to be doing what I'm doing, and I wouldn't change any of it for the world. But there are issues that everybody has to deal with, whether you're someone like me, whether you're somebody that's in school, whether you have a job that you don't really get along with everybody that you work with, the circles of people that you run with. It's all relative."

"As a person, I think you're always kind of searching for something or going through a hardship, whether it's your parents splitting up or anything like that. I mean, my parents stuck together, for whatever reason, until I was about 23, and then they decided to call it quits. But it was pretty clear to me that they didn't like each other, and that had an effect on me.

"It's tough, because I'm 43 years old, and I still have trouble. Don't get me wrong — I'm extremely lucky to be doing what I'm doing right now and I work very hard at maintaining this career and living this dream that I'm living, but there's also a price to pay. I mean, we give a lot of ourselves and every day… It's not like we're playing the show 24 hours a day, and that's really the only part of the day that feels normal to me. The rest of the day is occupying your mind with things that don't take you to the dark side of the mind, so to speak, and that can be tough in itself. I think that's why with what we do for a living, a lot of people do turn to drugs and alcohol and things like that. And I tried that as well. I think everybody kind of goes through that phase, and for some people, what starts out to be a social things ends up becoming a medicative sort of thing — whether they're using it to kind of shut off all these problems that are around them or that they have in their mind, but at the end of the day, it's not really solving anything."