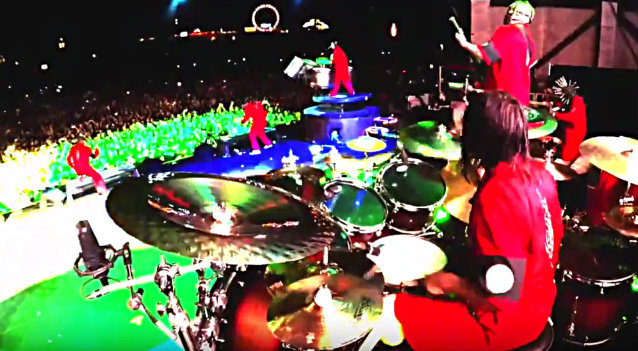 SLIPKNOT performed its 2001 album "Iowa" in its entirety at the Ozzfest Meets Knotfest festival on Sunday, September 25 at San Manuel Amphitheater and Festival Grounds in San Bernardino, California.

Drum-cam footage of SLIPKNOT drummer Jay Weinberg's "The Shape" performance from Ozzfest Meets Knotfest can be seen below.

Singer Corey Taylor told Metal Hammer about the album: "Our whole goal was to go in and make this dense, destructive album. We had no idea how destructive it was going to be. You can hear the bile in it, you can hear the frenetic passion for what we were trying to do."

The summer trek was likely SLIPKNOT's last U.S. tour in support of its latest album, ".5: The Gray Chapter", which was released in October 2014.