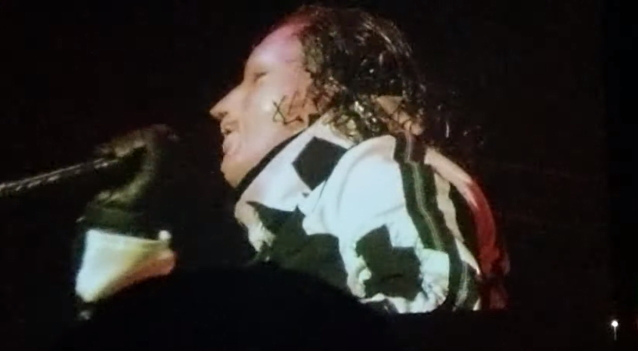 SLIPKNOT debuted a brand new look at its concert Tuesday night (July 30) at the Pain In The Grass festival in Auburn, Washington. Replacing the black jumpsuits SLIPKNOT wore at the start of the 2019 touring cycle are mostly white jumpsuits and slightly adjusted masks.

The identity of SLIPKNOT's new percussionist has not been revealed, but he appears in both the band's new videos for the songs "Unsainted" and "Solway Firth" and in the latest press shot.

SLIPKNOT's previous percussionst Chris Fehn sued the band in March, claiming he hasn't been properly compensated for his years of touring and recording with the group.

Fehn, known for wearing a Pinocchio-style mask, had performed with SLIPKNOT since 1998 and participated in all the band's previous albums.

Due on August 9, SLIPKNOT's sixth album, "We Are Not Your Kind", was once again recorded at a Los Angeles studio with producer Greg Fidelman, who engineered and mixed 2004's "Vol. 3: (The Subliminal Verses)" and helmed ".5: The Gray Chapter".

SLIPKNOT's "Knotfest Roadshow" headline tour features support from VOLBEAT, GOJIRA and BEHEMOTH. Produced by Live Nation, the 29-city outing kicked off July 26 in Mountain View, California at Shoreline Amphitheater and will continue through September 8 where it will conclude with a performance at Cynthia Woods Mitchell Pavilion in The Woodlands, Texas.

The soul is not so vibrant | Auburn, WA #knotfestroadshow