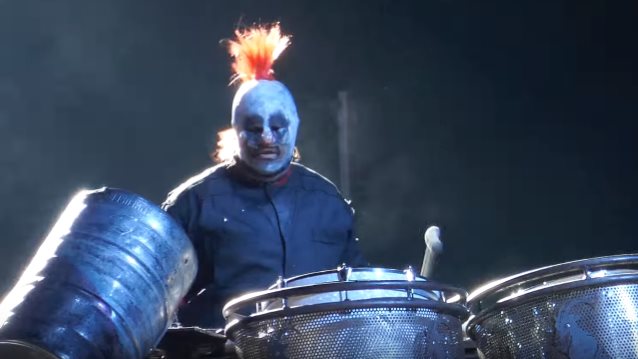 SLIPKNOT percussionist Shawn "Clown" Crahan has told Rolling Stone that he has a plan to get together with guitarist Jim Root in early February and start writing new music — "because we want to write," Crahan added — and they'll leave the date they actually go back into the studio to record the follow-up to ".5: The Gray Chapter" album up in the air.

".5: The Gray Chapter" was released in October 2014 following a six-year hiatus during which founding SLIPKNOT bassist Paul Gray died and original drummer Joey Jordison was dismissed. Since the CD's release, several of the SLIPKNOT bandmembers, including Root and fellow guitarist Mick Thomson, have expressed hope that the group could record the follow-up effort sooner than expected, with Root claiming in interviews to have already begin compiling ideas for SLIPKNOT's next release.

SLIPKNOT has hinted that its next studio effort could be a double concept album, with singer Corey Taylor saying: "We're talking about it. [Crahan] and I and Jim have been talking about what would be next. And the idea that we had was to kind of come up with the concept and then provide the soundtrack for it. But then I told them… I was, like, 'Let's take it even further and let's make our 'Purple Rain', let's make our PINK FLOYD 'The Wall'.' With a movie — not just the album, but do the movie… like, do everything. And they were pretty into it. Yeah, I mean, it's gonna be a few years before we even get into that, but just the fact that we're laying the steps for it now just means that we're right back to where we were, which is just being five steps ahead of the game."

Taylor's "thing" is STONE SOUR, which released a covers EP, "Meanwhile In Burbank…, in 2015 and is scheduled to enter the studio in January to record the follow-up to the band's 2012 double concept album, "House Of Gold And Bones".

Crahan's debut as a feature film director, "Officer Downe", arrived in theaters and on-demand platforms on November 18. Based on a graphic novel, the violent sci-fi film follows a police officer who is repeatedly killed, resurrected, and sent back into the field due to a mysterious technology that essentially makes him immortal. Kim Coates from "Sons Of Anarchy" stars in the title role.