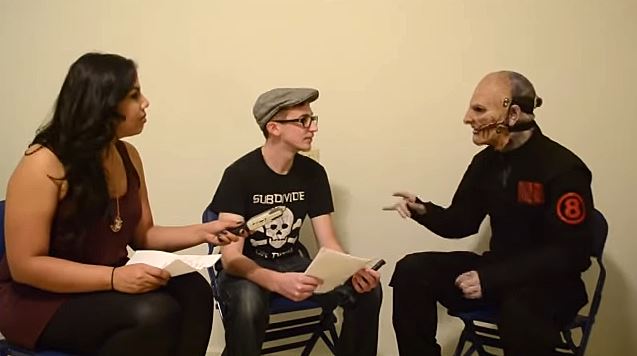 KLAQ's Lisa Sanchez and a lucky radio station listener, Christopher Schoemann, conducted an interview with SLIPKNOT singer Corey Taylor on October 29 in El Paso, Texas. You can now watch the chat below.

Asked for his opinion on the recent report that not one artist has managed to sell more than one million albums in the U.S. the first nine months of 2014 and how it relates to Gene Simmons' comment that "rock is dead," Taylor said: "I think people put too much [focus] on sales. 'Cause that doesn't relate to how many people have heard it. You know what I'm saying?! And in this day and age, it's more about getting people to hear the music. I mean, we had three million views of the Knotfest live streams. You don't get an award for that. We had so many million views of 'The Negative One' video and 'The Devil In I' video. You don't get awards for that. So, for me, what we did was great."

He continued: "I love the fact that we had the highest sales in a first week for a metal band [with SLIPKNOT's fifth album, '.5: The Gray Chapter'], the whole year, in a long time, to be honest. I'm proud of that. But at the same time, that doesn't relate to how many people have heard it, and how many people have gone out and bought specific songs. Just the fact that we had 65,000, almost 70,000 people, over the weekend of Knotfest, I mean, that proves something, you know?! You don't always need a platinum album to relate that to success. So, with all due respect to Mr. Simmons, he needs to get out more."

".5: The Gray Chapter" sold around 132,000 copies in the United States in its first week of release to land at position No. 1 on The Billboard 200 chart. The CD arrived in stores on October 21 via Roadrunner.