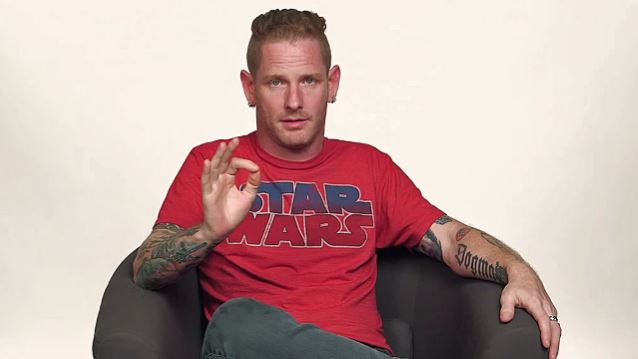 SLIPKNOT and STONE SOUR frontman Corey Taylor has slammed rapper Kanye West for claiming to be "the greatest living rock star on the planet."

Admittedly not known for his modesty, West told attendees at last month's Glastonbury festival in England that they were witnessing something special. "You're watching the greatest living rock star on the planet!" Kanye said during his performance.

Taylor, who headlined England's Download festival in June with SLIPKNOT, took issue with West's claim, recording a video message for Kanye during a visit to the Music Choice studios in New York City. Corey said (see video below): "Kanye, you are not — not — the greatest living rock star of all time. The fact that you had to tell people that kind of says it all. You remind of the guy who brags about pussy. They never get as much as they brag about. Stop it. [Slaps wrist] Stop it!"

West had previously compared himself to visionaries in the fields of art, fashion, technology, sports and business.

During a 2013 concert in Paris, the outspoken rapper called himself Picasso, Steve Jobs, Walt Disney and Basquiat.

In an interview with U.K.'s Sunday Times, Kanye defended his comments. He said: "For all haters, I'm not saying I'm Da Vinci, but I feel it's right for any human being to compare themselves to anything.

"People get really uptight about my comparisons, but I'm an extreme speaker, and I speak through comparisons."

Taylor's new book, "You're Making Me Hate You", is being released today (July 7) via Da Capo Press, a member of the Perseus Books Group.

Corey's last book, "A Funny Thing Happened On The Way To Heaven", was published in the summer of 2013 and landed at No. 23 on the New York Times "Hardcover Non-Fiction" best sellers list.