Japanese promoter Hayashi International Promotion (H.I.P.) conducted an interview with SLIPKNOT members Corey Taylor (vocals) and Shawn "Clown" Crahan (percussion) prior to the band's August 14 concert at The Forum in Inglewood, California. You can now watch the chat in three parts below.

Speaking about how SLIPKNOT's summer tour with MARILYN MANSON came about, Taylor said: "Obviously, there was a mutual respect there. We were fans of his when he started. And he was one of those artists that was pushing the boundaries musically, energetically [and] artistically. I mean, he was someone who was so cutting edge and yet so rough, you know what I'm saying? It was something that, we were almost kindred spirits in that way; we've always put a lot of emphasis on marrying the art with the music and that kind of pagan vibe. So, for us, it was almost like two old dogs sniffing each other's ass. But at the same time, over the years, we've both taken risks, we've both come a long way, we've taken our hits, and we've stood back up. So putting this tour together was… it just kind of made sense in a lot of ways."

SLIPKNOT's early November appearance at Knotfest Japan will likely to be the band's last show in support of its latest album, ".5: The Gray Chapter", which was released in October 2014.

".5: The Gray Chapter" was officially certified gold on August 31 by the RIAA (Recording Industry Association of America) for sales of more than 500,000 copies. The certification came six months after RIAA started including on-demand audio and video streams and a track sale equivalent in gold and platinum album award.

The identities of their replacements were officially revealed in 2015 to be drummer Jay Weinberg and bassist Alessandro "Vman" Venturella. 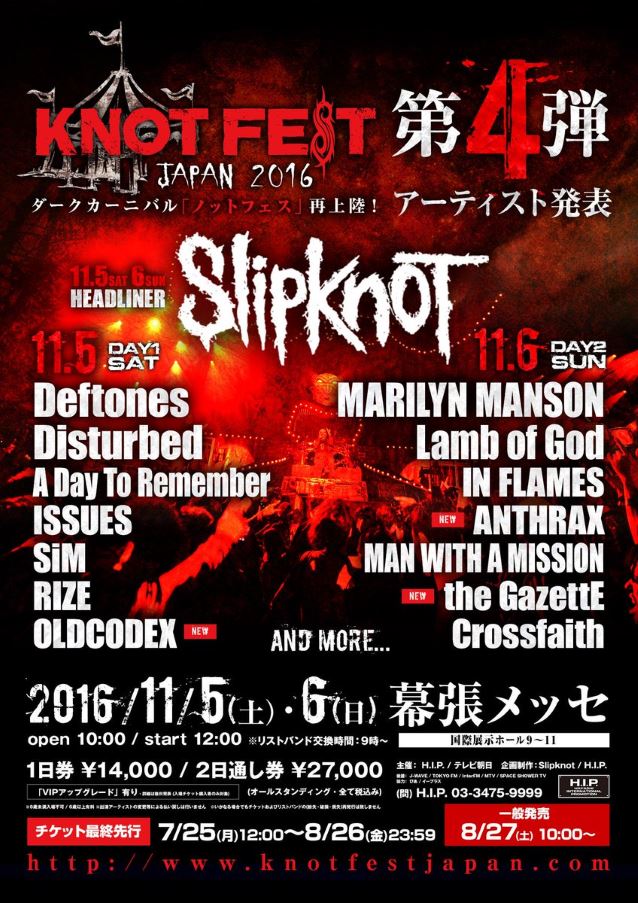