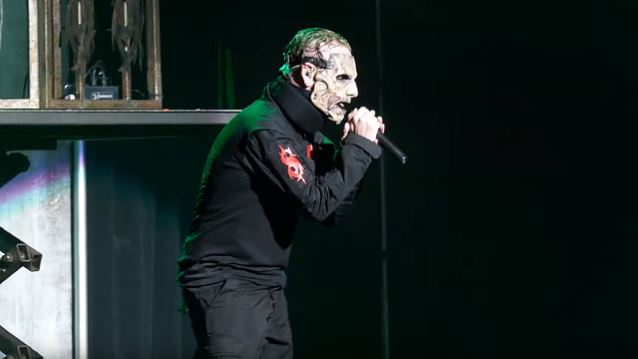 In a recent interview with Exclaim!'s Aggressive Tendencies, SLIPKNOT frontman Corey Taylor gave his opinion on many current issues in addition to discussion the status of his various projects. The latest clip from the chat can be seen below. A couple of excerpts follow (transcribed by BLABBERMOUTH.NET).

On using his platform to speak out on topics that he is passionate about:

Corey: "I don't know if it's a good thing or a bad thing, but I have an opinion, and I always have. It's not that I just have a giant mouth — I mean, I'm sure that helps to get it out there — but, for me, I am never going to play it safe. I am never going to worry about whether or not I am sending the right message.

"When you know who you are, it makes it easier for you to know what you'll fight for.

Corey: "Social media has made it so everyone has a platform. That's not necessarily a good thing, because look what's happening to poor Leslie Jones [who stars in the all-female casted reboot of 'Ghostbusters'] right now. She has been, basically, driven off Twitter [after being bombarded by racist tweets] — temporarily, hopefully — just because she's a part of a movie that I haven't even seen yet. But me and a host of other people are really starting to go, 'Woah, woah, woah. Uh-uh. We're not gonna let that stand.' We are not gonna let something like that kind of cyberbullying, racist rhetoric, misogynistic bullshit, we're not gonna let that stand. We are going to come to her aid whether she wants it or not, because that's the right thing to do."

On the "Black Lives Matter" movement:

Corey: "People, they misunderstand that whole movement. They're trying to paint it that that movement is trying to say 'Only Black Lives Matter.' That's not the point at all. The point that they're trying to say is that, yes, all lives matter, but black lives are the ones that are under attack right now, so we need to rally around them. And the more people try to split hairs about it, the more they're missing that point. I'm not gonna let that go, and I'm certainly not gonna let people split hairs about it, because it's fucking ridiculous. The second that you try to defend something like that, you've lost the battle, because that's not what it's about. And that's why I've really tried to bring at least my fans into the conversation by being, like, you know what? You can fight it intellectually if you want to, but don't let it come down to that base hate. There's no way you win on that. If you can't fight it with love, you have to fight it with a sort of intellectual compassion, 'cause that's the only way people are gonna come around. If I have to spend the rest of my life reminding people of that, then I will. It's easier to swim with the current than it is to turn around and try to fight the current. I have to believe that other people feel the way I do. And if they don't, then we are truly lost."