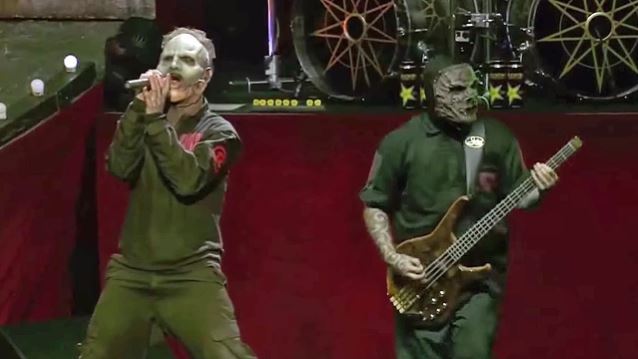 SLIPKNOT was forced to walk off stage several songs into its show in Hartford, Connecticut on Sunday night (August 2) when bassist Alessandro "Vman" Venturella had to be rushed to the hospital due to a medical emergency. After about a twenty-minute break, SLIPKNOT returned to the stage without Venturella and played the rest of the set as an eight-piece.

In a new statement posted on SLIPKNOT's social media sites, the band offered the following update on Venturella's condition:

"After a medical emergency during last night's show, we are relieved to let everyone know that our bass player, Alex 'Vman' Venturella, is well on the road to recovery. Alex collapsed mid-set after feeling unwell and as a precautionary measure was taken to hospital where he was found to be suffering from severe dehydration. After recuperating overnight, he has now been discharged from hospital and is on his way back to his SLIPKNOT family. All being well, Alex will be back onstage with us tomorrow [Tuesday, August 4] in Mansfield, Massachusetts. We thank everyone who reached out with messages and well wishes for Alex and we look forward to be being back at full tilt for the rest of the 'Summer's Last Stand' tour."

Venturella began working with SLIPKNOT during the recording of its latest album, ".5: The Gray Chapter", contributing bass tracks along with guitarists Jim Root and Mick Thomson and former touring bassist Donnie Steele.

He made his live debut with the band last year at the first annual Knotfest.