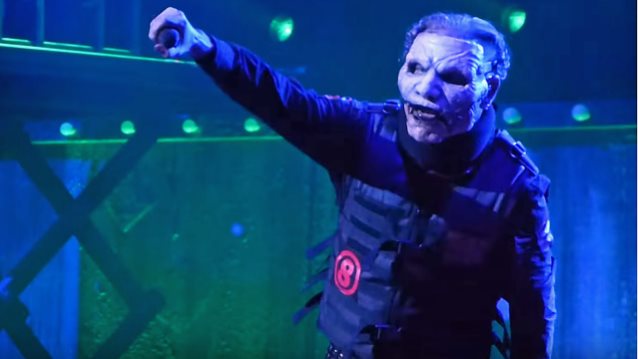 SLIPKNOT's fifth studio album, ".5: The Gray Chapter", was officially certified gold on August 31 by the RIAA (Recording Industry Association of America) for sales of more than 500,000 copies. The certification came six months after RIAA started including on-demand audio and video streams and a track sale equivalent in gold and platinum album award.

".5: The Gray Chapter" capped a very turbulent period for the masked rockers in which they dealt with the death of Paul Gray and the firing of drummer Joey Jordison, both longtime members and songwriters. Despite it all, singer Corey Taylor told The Pulse Of Radio he's proud of what the band has accomplished this time out. "The fact that we were able to kind of pull ourselves back up and not only go in and make a really good album, but make an exceptional album, in my opinion, I think it's a testament to just how talented this band is," he said. "It's a testament to how much passion we have for it. It's a testament to how much we're willing to fight to accomplish everything that we want to accomplish. To me, I think it's one of the best albums we've ever made."

The identities of their replacements were officially revealed in 2015 to be drummer Jay Weinberg and bassist Alessandro "Vman" Venturella.