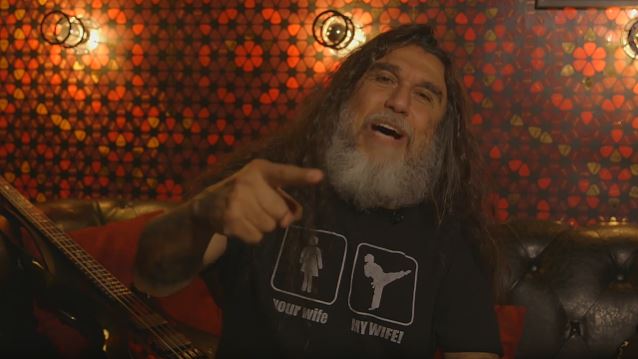 In a brand new interview with Loudwire, SLAYER frontman Tom Araya was asked if he thinks the band's late guitarist, Jeff Hanneman, would have been proud of SLAYER's new album, "Repentless". He responded (see video below): "Yeah, I think he would have. When we first started [putting ideas together for 'Repentless']… They were demoing [music for the album] a while ago. And Jeff was around, and I kept telling him, 'Dude, you need to listen to some of the stuff. Help out here.' And he'd show up to rehearsals and he'd listen and he'd leave. But I kept telling him, 'You've gotta put your hands in this, because you can make things sound really good.' So when we went into the studio after he passed, I was a little apprehensive, because SLAYER is a combination of the two of them [Hanneman and guitarist Kerry King] putting music ideas together, and so it was, really, to me… I felt it would be really lopsided, because SLAYER has two sounds: really aggressive and fast, but also aggressive and slow. So we started recording the songs and working on the ideas, and the more and more I worked on the vocal aspects of the songs, they started coming together. I was, like, 'Okay, this sounds good. This is okay. This is good.' And then when we were coming towards the end, and I would listen to everything, I thought, 'Okay, this is SLAYER. This, to me, is SLAYER. This is gonna be good.' So I figured once I could hear that, I knew that everybody would be okay with it. 'Cause I'm a fan, and, you know, I wasn't sure how things would turn out with Jeff not being present. But it sounded really, really good. It came out the way I'd hoped it would."

Gary Holt, who is still a member of San Francisco Bay Area thrash icons EXODUS, has been the touring guitarist for SLAYER since January 2011 when Hanneman contracted necrotizing fasciitis, also known as flesh-eating disease, from a spider bite in his backyard. The infection ravaged the flesh and tissues of Hanneman's arm, leading to numerous surgeries, skin grafts and intense periods of rehab that forced him into semi-retirement and left him near death at several points.