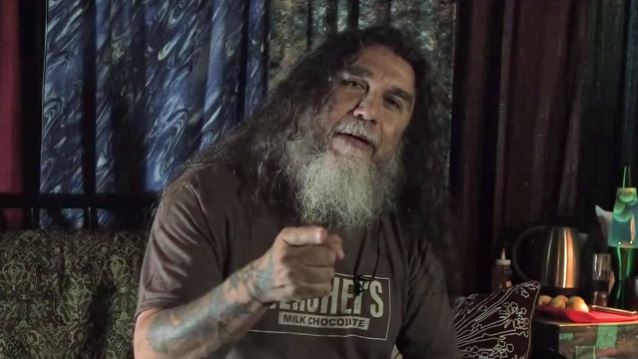 The 2015 Mayhem Festival generated controversy earlier in the summer after Lyman blamed the event's low ticket sales on the fact that metal has failed to produce new and younger headlining bands, adding that "metal got gray, bald and fat" and "chased girls away." SLAYER guitarist Kerry King responded by saying that the problem with this summer's event lay not so much with the metal bands themselves but with the way the festival was organized. He told Metal Insider: "Do I know this tour wasn't booked correctly? Absolutely I know this tour wasn't booked correctly. [Fellow SLAYER guitarist] Gary Holt made the comment that usually there's the main stage, a second stage, a third stage, and then that piece-of-shit record stage… Now what they're calling a second stage is at best a fourth stage and they're wondering why people aren't showing up." He continued: "It's easy to fill these stages, but I guess they wanted a different price point, take away the second and third stage which I think had a lot of value. To me, a second-stage headliner is ANTHRAX, MACHINE HEAD…"

Asked if he agreed with King's sentiments on the Mayhem Festival, Araya told VH1.com: "I talked to Kerry about it and he told me how he felt, and I kind of just felt the same way.

"The guy [Kevin Lyman] was an idiot. You know, you want to self-promote, you don't want to put an end to your career. So I was upset. I couldn't believe he said what he said.

"By all accounts, I wasn't really happy with how they handled the the negotiating process to the festival."

He continued: "In all honesty, when they first came to us and approached us with the festival and who they had as a lineup, we said no. Then they came back to us and said, 'Well how about this, and this is what we'll do.' And we're like, 'Okay, that's cool. That sounds reasonable.' So it wasn't us going, 'We want to headline your festival!' 'You guys suck.' First we said no, and then they came back to us. And, I'll use this phrase loosely, they came back to us with a better offer. We thought everything was great, and then before the tour started, they were unsure about how things were going with ticket sales, and this and that, And we're, like, 'Hey, we can pull the plug. We don't have an issue with that.' So, it moved forward, and then they started making adjustments to the stage, to the lights, to sound, to venues. They made a bunch of arrangements and changes. And that was on them. We never said anything other than, 'Okay, if you need to do that, that's fine.' So Kerry had a lot on his mind, and he said a lot less than he could have. It sounded more like he was whining and griping about stuff."

The 2015 edition of Mayhem kicked off on June 26 in Chula Vista, California and wrapped on August 2 in Dallas, Texas.

SLAYER was this year's Mayhem headliner, but the main-stage lineup lacked the second big headliner of previous years. Past lineups have paired the likes of AVENGED SEVENFOLD and KORN, DISTURBED and GODSMACK or ROB ZOMBIE and FIVE FINGER DEATH PUNCH. This year, SLAYER was joined by KING DIAMOND, HELLYEAH and THE DEVIL WEARS PRADA. In addition, this summer's Mayhem Festival has shrunk from four stages to two, and the overall lineup has been trimmed by about half a dozen bands.