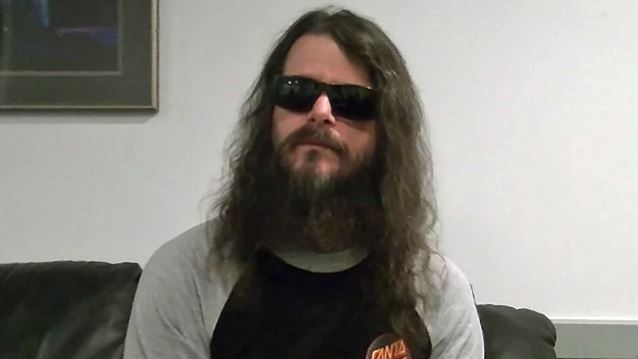 Author Marisa Williams conducted an interview with SLAYER drummer Paul Bostaph at the July 11 stop of the Rockstar Energy Drink Mayhem Festival at the DTE Energy Music Theatre in Clarkston, Michigan. You can now watch the chat below.

Asked how the music industry has changed since he first started playing drums professionally, Bostaph said: "Well, firstly, when I started recording and touring, there was no Internet. Cell phones didn't exist, pagers didn't exist. So pretty much the only way you ever got in touch with anybody was by a landline. Over the years, music videos became popular, you had MTV, MTV changed, grunge came and went, rap has evolved, [and] heavy metal has been here the whole time. Also, the [advent] of the Internet. Now that's changed the music industry completely, because people are able to appropriate, download or get music for free — music from their favorite bands — which affects the income of everything. It's changed the dynamic and the economics of the music industry and how it's approached. And, you know, like, YouTube… people get discovered on YouTube. Justin Bieber was discovered on YouTube…'

He continued: "People have immediate access to anything they want, [and] they also have a very strong opinion now. When you say something in the press… For instance, Blabbermouth, or some of these web sites, they'll take something you say out of context and make it controversial — take a portion of your interview — and then you see all these comments. So people actually have power now that they didn't have, say, in 1990, that they can, with their opinions… They can voice their opinions… Some people are very educated in their opinions, some people are pretty brutal in their opinions… but that's their opinion. So it definitely changes… It's an interesting dynamic. I think your skin has to be thicker nowadays [if you are playing in a band]."

Bostaph rejoined SLAYER in 2013 after previously leaving the group twice.

Original SLAYER drummer Lombardo was effectively fired from the band after sitting out the group's Australian tour in February/March 2013 due to a contract dispute with the other members of the group.

SLAYER's new album, "Repentless", will be released on September 11 via Nuclear Blast. The CD's title track is now on sale digitally virtually everywhere, including on Amazon, iTunes and Google. The artwork was created by Brazilian artist Marcelo Vasco in collaboration with the band's Tom Araya and Kerry King.

"Repentless" was produced by Terry Date, who has previously worked with PANTERA, SLIPKNOT and SOUNDGARDEN.