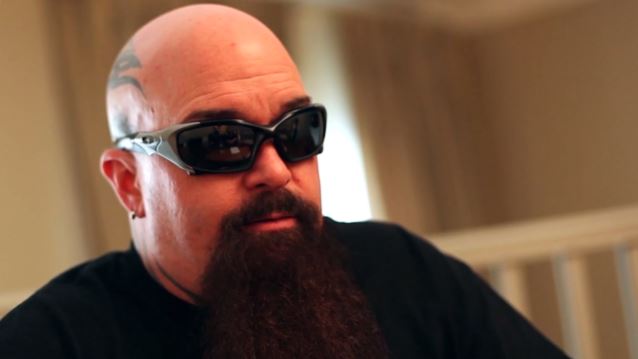 France's Metal XS recently spoke to SLAYER's Kerry King and KISS's Gene Simmons about the current rock and metal scene. You can now watch the footage below.

Said King: "I think a lot of new bands really get popular because of fads, and fads come and go and they never stay. Metal is certainly not a fad. Hard rock is not a fad; it's something that's gonna be here forever. Unfortuantely, in the metal community, I haven't seen the next surgence [sic]."

He continued: "We were at a festival in South America somewhere, and they feed you a live feed of the stage, so you can watch it like you're out front. And I was watching a band, and I went over to [fellow SLAYER guitarist] Gary Holt and I said,' Gary, if I was a kid and these were my heroes, I would never pick up an instrument.' They didn't compel me to wanna be them, and I think that's what's missing in younger music… There's not a vibe. You look at some bands these days, and I've got nothing against roadies, 'cause I love my crew, but these bands look like roadies. It looks like they're just up there rehearsing, and that doesn't inspire me to wanna play guitar and be just like 'em."

King added: "When I was a kid, I [looked up to people like] Ted Nugent, Eddie Van Halen, Randy Rhoads… you know, people that are, like, 'Man, I wanna be like that guy.' And I don't see that in [new] bands. And maybe it's because I'm older and I don't know what's cool — I doubt that — but that's my opinion."