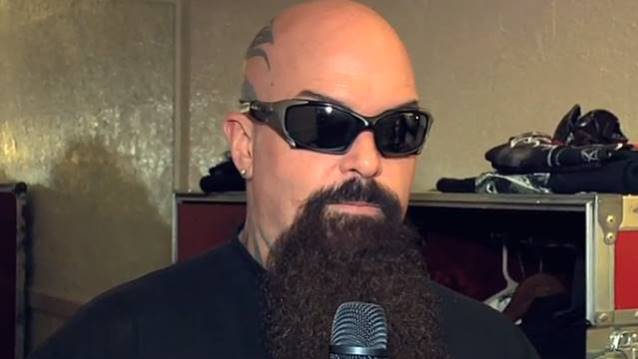 Steve Patrick of UWeekly recently conducted an interview with SLAYER guitarist Kerry King. A couple of excerpts from the chat follow below.

UWeekly: In a recent interview you said that both you and [late SLAYER guitarist] Jeff [Hanneman] each had a song left off "World Painted Blood". Yours was called "Atrocity Vendor". What was Jeff's called?

UWeekly: I assume it's about strangling someone?

King: I would imagine. I mean, it was so last minute I never even looked at the lyrics. [laughs]

UWeekly: It was just announced that all of SLAYER's albums will be reissued on vinyl in December. Are you a fan of listening to LPs?

King: I am. I don't want to sound like a hypocrite because I don't have a turntable set up, but I think it's cool like when we put out "The Vinyl Conflict" a few years back. I think that was a really cool product. I truly believe that vinyl sounds better. It's not just something audiophiles say. I found that out firsthand a number of years ago and I was stunned. I didn't know. Vinyl certainly sounds better. It's less compressed.

UWeekly: When you're songwriting in the future, do you think you'll consider what Jeff's viewpoint would have been on the new tunes if he were still here?

King: Well, there's definitely some things I need to finish that weren't finished and my only thought on that is that I don't want people to hear Jeff's last contribution and think that it's adequate. I want people to hear it and say, "Yeah! I'm happy with that." So I'm gonna really focus on getting those where they need to be whenever we include him on a record because I don't want it to sound like an afterthought… you know, unfinished ideas. I want it to be awesome so people can have someting and say, "I'm happy with this. It's cool."

Read the entire interview at UWeekly.