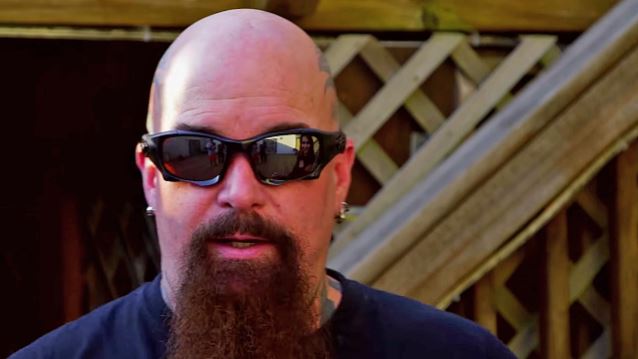 Sofia Samrad of DCW50 conducted an interview with SLAYER guitarist Kerry King and drummer Paul Bostaph at a recent stop of the Rockstar Energy Drink Mayhem Festival. You can watch the report below.

Asked about the title of SLAYER's forthcoming album, "Repentless", Kerry said: "I made [the word] up. I didn't realize I made it up. I mean, it seemed like a word to me, and then I looked it up and it wasn't there. [Laughs]"

He continued: "To me, 'repentless,' you know, is, basically, having no regrets, not looking back and saying, 'I wish I should have done things differently.' 'Repentless' is meaning I have no reason to repent."

Asked if there is anything that stands out that he wishes he would have done, Kerry said: "No, I like where we're at. I mean, if I said anything, I'd probably wish I would have paid more attention in the '90s, but we got past it."