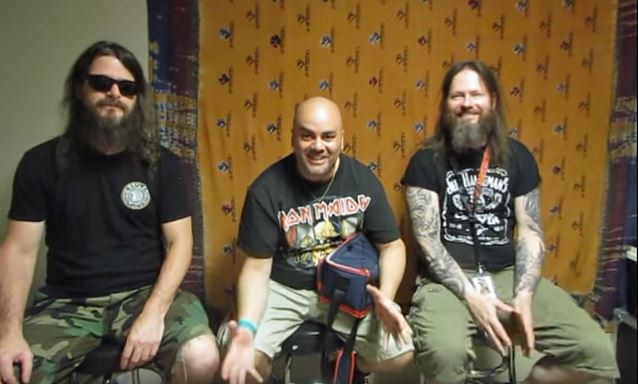 On July 31, Jay Nanda of San Antonio Metal Music Examiner and AXS.com conducted an interview with SLAYER guitarist Gary Holt and drummer Paul Bostaph at the San Antonio, Texas stop of this year's Rockstar Energy Drink Mayhem Festival. You can now watch the chat below.

The 2015 Mayhem Festival generated controversy earlier in the summer after festival co-founder Kevin Lyman blamed the event's low ticket sales on the fact that metal has failed to produce new and younger headlining bands, adding that "metal got gray, bald and fat" and "chased girls away."

SLAYER guitarist Kerry King responded by saying that the problem with this summer's event lay not so much with the metal bands themselves but with the way the festival was organized. He told Metal Insider: "Do I know this tour wasn't booked correctly? Absolutely I know this tour wasn't booked correctly. Gary Holt made the comment that usually there's the main stage, a second stage, a third stage, and then that piece-of-shit record stage… Now what they're calling a second stage is at best a fourth stage and they're wondering why people aren't showing up." He continued: "It's easy to fill these stages, but I guess they wanted a different price point, take away the second and third stage which I think had a lot of value. To me, a second-stage headliner is ANTHRAX, MACHINE HEAD…"

Asked for his take on the controversy surrounding this year's Mayhem festival, Holt told the San Antonio Metal Music Examiner: "Things were said in the media that were spun wrong and attributed to Kerry quoting me, which I didn't say, and Kerry says he never said it. Like, you know, criticizing the Victory Records stage, and some of my close young compadres are on that stage — SHATTERED SUN, Texas natives. And they know it. You know, these guys, I do everything I can to help them. Ask [SHATTERED SUN guitarist] Daniel [Trejo]. He comes to me when he wants information and advice on endorsements, and I'm totally willing to give it."

He continued: "The attendance [for this year's Mayhem] has been down [compared to previous years]. And the only thing I ever actually did say was what this tour is lacking is a genuine second stage. There's usually a record label-sponsored stage, a second and a third and a main stage. And what you have is the main stage, and then there… this time it's the Victory Records stage. The last time I did Mayhem, it was the Sumerian Records stage. Those bands are all young up-and-comers and they're awesome; we've hung out and barbecued, amongst other cannabis-related things. And then, you know, for bad blood to be started because one guy [referring to Kevin Lyman] decided to throw the tour under the bus early into it, it's, like… We're all out here. [We're] working out hardest to put on the best show we can. And those guys, they're young. They're out here, you know… Like any young band, you're working for nothing. You're working to further your band's cause and to spread your name."

Holt added: "And then, I can understand, people all the way up to us started feeling, like, 'What are we doing? Are we not appreciated?' And I know I can speak for Paul, we appreciate these younger bands. I mean, hell, my other band, we're still a club band. I'm more likely to go out on tour with EXODUS and these younger bands on the Victory Records stage than anybody else. And if you ask any young band that's ever toured with EXODUS, we treat 'em not like an opening band. We kidnap 'em, put 'em on a bus, make 'em drink vile shit and take care of 'em. But other than that, and a couple of shows which have been pretty grim, the tour's been great and I'm having hella fun. That being said, I'm glad it's almost winding down, 'cause I'm 51 fucking years old."

Bostaph said: "I agree with Gary a hundred percent. I couldn't put it any better. Everybody's out here giving a hundred percent. It seems like we're all out here throwing each other under the bus, but we're not. I mean, really, we're all in this together, and like Gary said, all the young bands are just out there doing what they do and they're kicking ass. And all the way up to everybody on the main stage. So it's a true metal tour. Whatever the perception is in the press isn't really what it's like out here."

This year's Rockstar Energy Drink Mayhem Festival — which featured SLAYER in the headlining slot — kicked off on June 26 in Chula Vista, California and wrapped on August 2 in Dallas, Texas.

Lyman told the Detroit Free Press about the festival's 2015 lineup, which also included KING DIAMOND, HELLYEAH and THE DEVIL WEARS PRADA: "It was the best available for what we had to work with. We had pressure to keep the package at a certain price and make that work, and we had pressure on headliner expenses." In addition, there are fewer acts on the bill and only two stages this time around because "we had to condense it," Lyman said. "The expenses of putting on those shows had gotten high, so we had to push it all into the concourses. They [venues] don't want to build a fence outside [for third and fourth stages] anymore. Those things cost money."