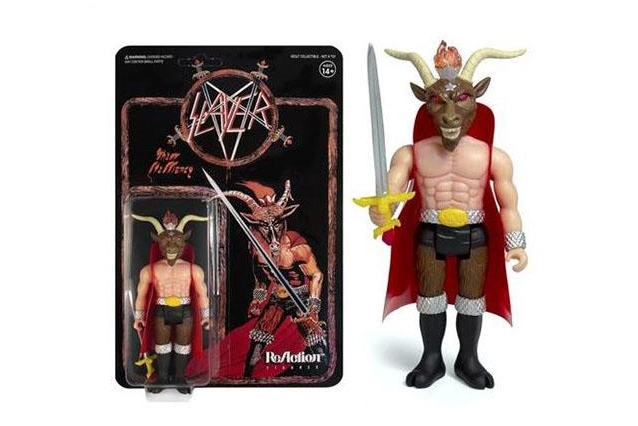 Thrash metal legends SLAYER have signed a deal with designer toy and apparel company Super7 to create the "Show No Mercy ReAction Figure".

The "Show No Mercy ReAction Figure" will be released this month at New York Toy Fair.

Last year, SLAYER's merchandising company filed a lawsuit to get a judge's order that it can use to direct federal marshals, and authorize local and state police and agents hired by the company to seize bootleg T-shirts and similar items during the band's farewell tour.

Global Merchandising filed the complaint for trademark infringement and unfair competition against various unnamed defendants described in the complaint as "numerous independent unlicensed peddlers and manufacturing and distributing companies." The defendants were, according to the complaint, going "to sell or hold for sale outside of and within the confines of the concert halls at which SLAYER is performing before, during or after SLAYER concert performances."

The complaint went on to note that "more than $25 million worth of licensed merchandise bearing the SLAYER name, trademark, logos and/or likenesses have been sold" to date.