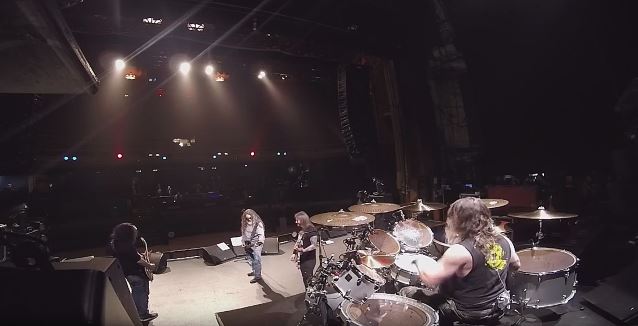 SLAYER drummer Paul Bostaph has uploaded video footage of a soundcheck "jam" that took place before the band's March 22 concert at The Warfield in San Francisco, California. Joining Bostaph during the jam were his SLAYER bandmates Tom Araya (bass, vocals) and Gary Holt (guitar) alongside TESTAMENT guitarist Alex Skolnick.

SLAYER and TESTAMENT's North American tour will wrap on March 26 in Las Vegas, Nevada. Also appearing on the bill is CARCASS.

Bostaph, who was previously SLAYER's drummer from 1992 until 2001 and recorded four albums with the band, rejoined SLAYER in 2013 after the band's original drummer Dave Lombardo was effectively fired from the band due to a contract dispute with the other members of the veteran California-based thrash metal act.