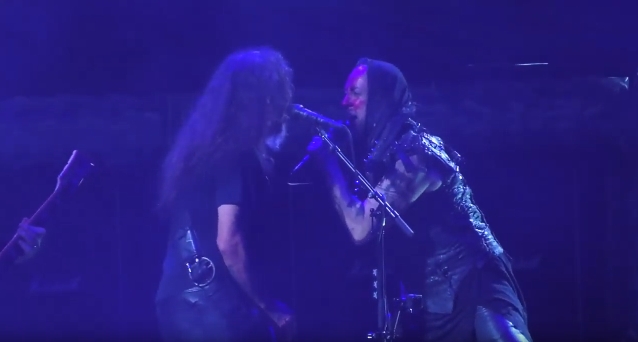 BEHEMOTH frontman Adam "Nergal" Darski joined SLAYER on stage during the latter band's concert earlier today (Tuesday, June 4) at Arena Gliwice in Gliwice, Poland to sing the SLAYER classic "Evil Has No Boundaries". Video footage of the performance can be seen below.

Nergal previously performed the same song with SLAYER during soundcheck in August 2017 in Bonner, Montana. At the time, he stated about the experience: "'Evil Has No Boundaries': that's the song my affair with SLAYER has begun ages ago. I must have been eight or nine years old, I guess, when I heard it on a pirate cassette. Didn't know much of an English language so we would sing whatever we hear. And the word EVIL reminded us how PIWO (beer) sounded phonetically! We would fuck around and sing 'PIWO!!! PIWO!!! PIWO!!!' instead until years later when we realized its meaning. The word EVIL would eventually be the key word to define my whole career with the band on so many levels and beyond. When I told that story to [SLAYER guitarists] Kerry [King] and Gary [Holt], they were, like, 'Let's do it! We are in!!' I already knew the lyrics by heart and here I am... sharing the stage with one of the best bands on the planet in one of my favorite songs! Dunno how I'm gonna top it, but that's not the case now. Living the fuckin' dream and enjoying the fuck out of it."

Last fall, Nergal said that he was thrilled to support SLAYER during the band's farewell tour.

He continued: "Things change. People come and people go and we better get used to the idea that BLACK SABBATH is no more, that IRON MAIDEN are counting down their days as well. All the big bands we look up to will go sooner or later — probably sooner, because they're all in their 50s or 60s.

"I've just seen THE ROLLING STONES. Mick Jagger is over 70 and he's amazing, but we're just human, we are very fragile and shit happens.

He added: "I just want to see as much of my favorite music as I can before it's gone."

BEHEMOTH is continuing to tour in support of its latest album, "I Loved You At Your Darkest", which was released last October via Metal Blade Records in North America and Nuclear Blast in Europe. 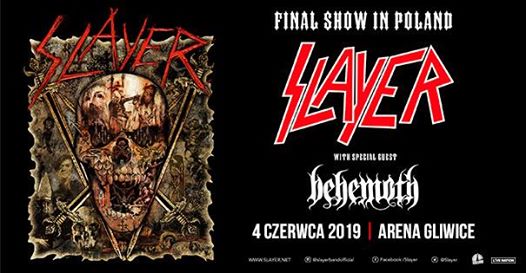