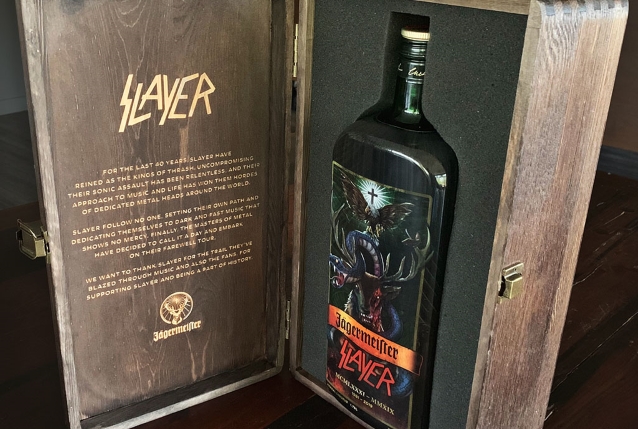 According to Metal Hammer, Jägermeister has launched a limited-edition bottle as a tribute to the legendary thrash metal band SLAYER.

The 1.75-liter bottle features custom-made SLAYER artwork and is presented in an engraved box and is limited to just 500 bottles, which are available through Jägermeister's online store.

SLAYER guitarist Kerry King says: "We've had some good times with Jägermeister through the years. we love that they're creating a limited-edition bottle to recognize the end of our journey and it looks awesome. I'm honored that our friends at Jägermeister hold us in such high regard. I can't wait to get my hands on one."

Jägermeister UK's music manager Tom Carson adds: "We have enjoyed a longstanding friendship with SLAYER. They're legends who have slayed the game for almost 40 years. Releasing a special-edition SLAYER bottle is our way of celebrating their legacy."

A message engraved inside the box reads: "For the last 40 years, SLAYER have reined as the kings of thrash. Uncompromising, their sonic assault has been relentless and their approach to music and life has won them hordes of dedicated metal heads around the world.

"SLAYER follow no one. Setting their own path and dedicating themselves to dark and fast music that shows no mercy. Finally, the masters of metal have decided to call it a day and embark on their farewell tour.

"We want to thank SLAYER for the trail they've blazed through music and also the fans for supporting SLAYER and being a part of history." 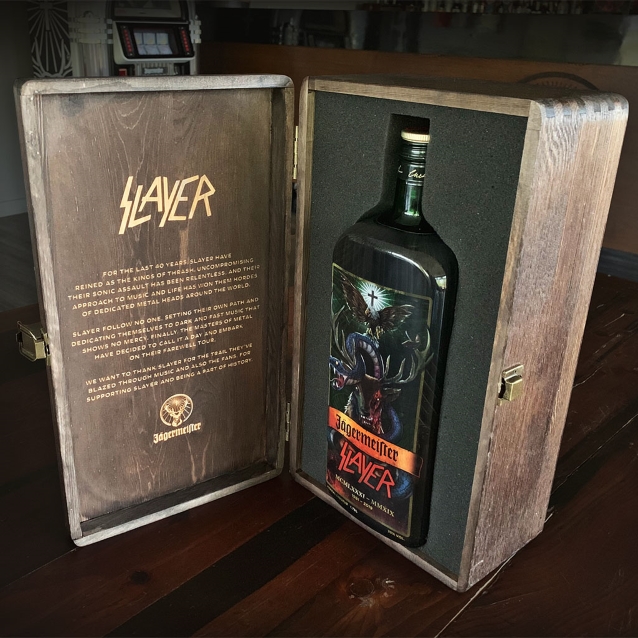