Continuum Books is offering a free sample chapter from "33 1/3: Reign in Blood", the first English-language book about SLAYER.

In the book, author D.X. Ferris takes a documentary approach to the record and its impact. It explores the album's creation based on interviews with it creators, including the band, producer Rick Rubin (the Def Jam co-founder who then was known strictly as a rap producer), and engineer Andy Wallace (who later produced Jeff Buckley's "Grace" and mixed metal bands including SLIPKNOT). And 47 artists and fans weigh in on the album's enduring legacy.

The November issue of Metal Maniacs says, "To say that 'Reign in Blood' is mandatory reading for fans of the band and the album is ridiculously understated. Perhaps more importantly, the book is essential for anyone with an interest in heavy metal."

Send an e-mail to Slayerbook ( at ) gmail.com, and Continuum will send a .pdf file of the chapter of about the album-opening song "Angel of Death", a stone-cold thrash-metal classic. The controversial tune nearly cost the band its new major-label deal.

Fans are also welcome to send any questions about the book to the e-mail address. The author will respond personally.

D.X. Ferris was interviewed live on the July 19, 20008 edition of "The Classic Metal Show". Listen to the chat in three parts below.

For more information about the book, visit www.myspace.com/rib333. 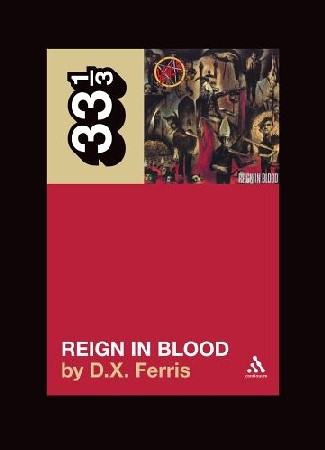